Note: I still get a lot of comments by Anonymous. Which I had to delete, as promised. Dear Readers, if you wish to comment, please leave a nickname, pen name, moniker at least. Your real ID/handle preferred, of course.

And an unforgiving Kak Wan speaks out: IIt's Dr M who needs us

"It does not change the views of Pakatan and the main agenda for us is to free Datuk Seri Anwar Ibrahim from prison. He is a political victim and he needs to be freed. It does not matter what (Mahathir) thinks about it. This has always been our agenda ...."

It does look like Tun Dr Mahathir Mohamad might have underestiated the response from his admirers and the people towards his chummy collaboration with old foe Lim Kit Siang and Gang. A young reporter from Mahathir's home state Kedah, whose entire family is was a die hard fan of the ex PM, immediately put up the #respectmyPM symbol onto his Facebook profile. But while the young man's opinion may not count much to many, Umno veteran Tengku Razaleigh Hamzah's stand that "I did not go, I do not support, and I didn't even know about (the pact)" is a mega setback. For talk by the Mahathir-Azmin-Muhyiddin-Ambiga-Kit Siang camp since Friday was that Ku Li, always the potential alternative PM since when Mahathir himself was the PM, was solidly with them. 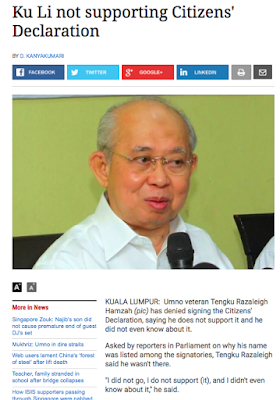 Ku Li isn't the only one disputing claims by the organisers of the so-called Citizens Declaration (Netizens are calling it the Mahathir Declaration) about the support they had. The other day Zaman Khan, a respected retired top cop, denied involvement in the pact. “I deny as strongly as possible, to say I am on the side of those who signed the declaration and will march to oppose the government. I am not involved,” said Zaman Khan, here
at March 08, 2016