So what's the story, TRP?

Puchong, 11 March 2016
Back then they told me Omar Ong was the man behind The Rakyat Post. Well, I remember thinking, why not? He was close to the PM and while he might not have the deepest pockets, financing a portal shouldn't be too taxing. And TRP seemed to be doing so well: its editorial team consisting mainly of experienced ex-mainstream journalists and editors were proving that a news portal could still remain faithful to journalism ethics and build up traffic without having to be rabidly and morbidly anti-government (or pro-Opposition). But late last year there were talks that TRP was having some funding problems. RM1 million a month was proving too much, especially given the pathetic ad revenues. And then all of a sudden, they announced that The Rakyat Post was shutting down operations. Some 70 journalists and editors were thrown into the streets, not paid a single sen since the New Year, and on Feb 29 The Rakyat Post announced that it was ceasing operations.

Nah, I told myself, Omar Ong couldn't have been behind this. He's too close to the PM and he's got more sense than to do this kind of thing ... 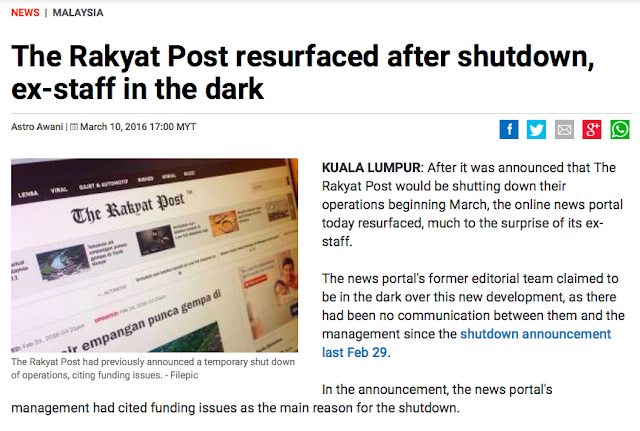 Understandably, the 70-odd journalists who became jobless after the Feb 29 "shutdown" are feeling they have been conned. "The management has not responded to communication since the shutdown. They haven't paid us our Jan and Feb salaries." Many of the ex-TRP journalists are my friends and former colleagues. All have bills to pay, mouths to feed. They have filed complaints with the Labour Office, the Industrial Court and the EPF.

To the people behind The Rakyat Post, I dont care if you close it down or come out with a new TRP, but do the right thing and pay up these ex staff of yours. Don't make it worse than it already is. To my fellow journos out there, think again before quitting your current job for that too-good-to-be-true salary offer by some media start-ups ...

p.s. I hear The Malaysian Insider has new paymasters?


NOTE: Remember, I don't accept comments by Anonymous anymore. Give yourselves names like xnakdedak or nakdedak, or better still bravely use your real/true ID, when leaving your views in my Comment Box, thank you.
at March 11, 2016