"We are not having sex. We are saving Malaysia." - A. Kadir Jasin on not-so-complimentary FB response towards Dr Mahathir's Save Malaysia alliance with the Opposition and Opposition-friendly civil society movement. 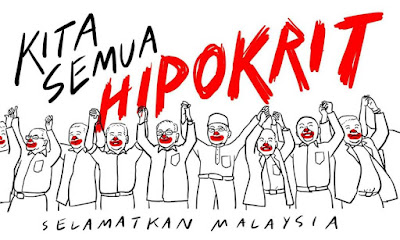 Puchong, the morning after (1 something a.m.):

So it has come down to this. In his great desire to see Najib Razak fall, Tun Mahathir Mohamad finally brought himself down to the level of his political foes in a so-called civil society movement to bring down the Prime Minister.
"I would regard this as the most bizarre day in all the years that I have been a journalist," a scribe who's not particularly fond of Mahathir or Najib told me.
"There is nothing left to shock me," he said.
I said I agreed with him. It was also sickening. The doughnut I had just gulped down was restless in my tummy.
Later, a YB asked me if I was in town.
"I am not feeling too well, YB, especially after seeing what has become of the Tun," I told him.
"Sad," he texted back. "Never thought I'd see the day. Rest well, Sir. We'll mourn this shame of one whom we once revered ever so dearly."

Journalist Nuraina Samad, in her FB posting after the Save Malaysia special h e r e, chooses not to say too much.
She didn't have to. 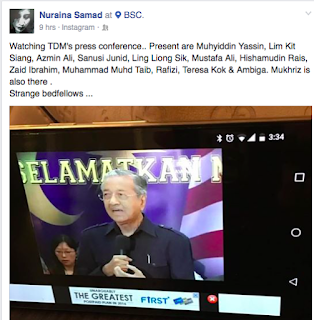 Strange bedfellows, indeed.
It was all there for everyone to see.

I was following Awani's "live" coverage of the so-called Save Malaysia campaign with two former editors of the New Straits Times, a government-friendly daily once ruled by Kadir. None of us were proud to see Kadir there with the politicians, although we understand his loyalty to Dr Mahathir and Tun Daim Zainuddin.
It was strange to see our ex boss lined up as one of the signatories of this Citizens' Declaration to oust Najib Razak. I thought The Scribe looked uncomfortable, as if he'd rather be elsewhere.

He was seated next to Tian Chua during the signing, if I'm not mistaken. What was my ex boss thinking, I did wonder ...

"We are not having sex. We are saving Malaysia. Wallahualam". - Kadir, in response to Nuraina's posting h e r e

"Did anyone talk about sex? Hmmm ... strange." - Anwardi Jamil, the film producer son of a legendary film producer, replies immediately to Kadir

"What's wrong with sex? Sex is good." - Hasnah Abd Rahman, PR practitioner and not-so-Opposition-friendly civil movement activist, and a former journalist with the NST when it was under Kadir.

Updates:
Why Life of Annie won't sign it, either: Staying neutral and away from creepy people
This strange group of people by Zakiah Koya
Mahathir-led motley crew an't decide who should lead by The Mole
at March 05, 2016