A day after Dr M quits Umno again, Najib is "said to" again by WSJ

"... RM2 billion belonging to the ruling United Malays National Organization was "pocketed" by a small group of people (and) that about one billion ringgit was taken out of the country last October to a Swiss bank account." - Wall Street Journal, 28 Sept 1998

Malaysians who take WSJ's negative reporting on their own country and Prime Minsiter as gospel truth should try googling and look at some of the paper's old articles that paint Malaysia as a rogue nation. You might just notice the obvious: that this is not the first time the WSJ is accusing a Malaysian PM of stealing billions of ringgit. In Protests against Mahathir continue, despite police warning the WSJ repeated and amplified Anwar Ibrahim's accusaiotn that Dr Mahathir was a thief. Dr M didn't waste his time suing WSJ. Perhaps because it was obvious to him that the foreign newspaper was rooting for Anwar. The RM2 billion + RM1 billion allegation was never proven, not by Anwar not by the WSJ.

Today, a day after Dr M quit Umno for the first time since 2008, the WSJ intensifies its attack on Najib Razak. 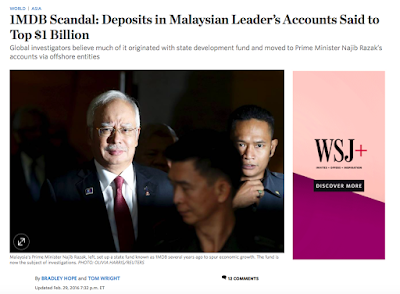 Note how the WSJ editors have opted for a "safe" headline ["said to top $1 billion"] in order to safeguard the paper in the even of a lawsuit by the Malaysiam PM. If the WSJ is really serious about journalism, it should drop the word "said to" and go for Najib's jugular.

Obviously it can't because it doesn't have what it takes to back up the allegations.

Just like the 1998 article when it could go to court and say it was just "merely reporting" an allegation made by Anwar Ibrahim ...

p.s As for Dr M's decision to quit Umno again, people probably fell off their chair because they were dozing off. In 2008, when he quit the party because Abdullah Ahmad Badawi wouldn't resign even after BN's dismal performance at the general elections that March, it was a sad affair. Yesterday, it was pathetic. I remember in 2002 when he threatened to resign at the Umno General Assembly, now that was shocking and impactful. But that was a long time ago. Too long.

1MDB has consistently maintained that it has not paid any funds to the personal accounts of the Prime Minister.   This has been reiterated by multiple lawful authorities including the Malaysian Anti-Corruption Commission, the Malaysian Attorney General, and various reputable international publications, who have confirmed that these funds came from Saudi Arabia.  Despite this, the Wall Street Journal continues to repeat the same disproven allegations.  However, not once has the publication offered any conclusive evidence to support its claims, with the only justification for their continued attacks being information that they claim to have obtained from unnamed and anonymous sources.  This reliance on anonymous sources, who may or may not exist, betrays a lack of basic journalistic standards on the part of the Wall Street Journal and the fact that the publication has lost all semblance of balanced reporting.