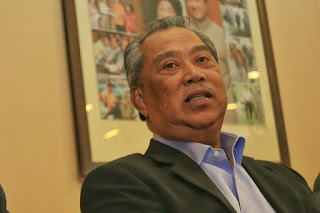 Reluctant wannabe no more. What former DPM Muhyiddin Yassin said, about Dr Mahathir Mohamad's offer to him to be Prime Minister after Abdullah Ahmad Badawi, was true. He turned Mahathir down - not once but at least twice. Muhyiddin wouldn't double cross his tag-team mate, Najib Razak. He wouldn't take the post of PM for himself. But I wouldn't call him the king maker. They were a tag team.

This was after the March 2008 general elections and Dr M had already openly called his predecessor to step down and take responsibility for the BN's extremely poor showing at the polls. Very few people knew that Najib and Muhyiddin had been working together within the party to effect change, even as Mahathir was screaming for blood from the outside. Together, the two - Najib was Umno deputy president and Muhyiddin the most senior vice president -  were starting the moves to get Umno members to put the pressure on Pak Lah to make way for Najib to become the new Umno president and Prime Minister of Malaysia, and Muhyiddin as the deputy, of course. They played the good cop, bad cop game very well.

I wasn't in Najib or Muhyiddin's "inner circle" but I was privy to some of the things done and said by the two during this period. The impression I got was, yes, Muhyiddin did not want the No 1 job. Or did not need it. "It should be Najib," he kept telling us. He may have other reasons (some said he didn't relish the idea of being a Mahathir balachi at all) but he was certainly loyal to Najib and he displayed it. But it wasn't a one-way traffic: as much as Muhyiddin was loyal to Najib, Najib was faithful to Muhyiddin, too, and remained so until Muhyiddin had made it absolutely clear that he was not backing him anymore.

When Mahathir started calling for Najib to quit, we asked the good doctor who he wanted as PM this time. Anyone but Najib, was the answer. Get rid of Najib first, worry about the successor later. So now anyone can be Umno president and PM.

At that point of time, I was quite sure Muhyiddin was not an option (updated: even though Mahathir conceded that Muhyiddin, by convention, should take Najib's place). Why? He had turned down Mahathir not once but twice (at least) so I didn't think the Tun liked that and would ever make him another offer.

But here we are: Muhyiddin has finally accepted the offer by Tun Mahathir to make him the next Prime Minister of Malaysia and president of Umno. He seems unsure and uncomfortable in his new role as Umno rebel, but he's made his choice. He's reluctant no more.

Question is, should he leave Umno if he no longer supports Najib? The real king maker will decide for him and this time I don't think Abang Din can say no.

What's got into Zam and Muhyiddin? - Bujai

Don't be nostalgic over past loyalty, Zahid tells Muhyiddin, TMI
An Unholy alliance? - The Unspinners
You must earn, not demand, respect - MMOnlione