1MDB gets vindicated as Najib's lawyers get QC input

I hear Najib Razak's lawyers have returned home from a sojourn during which they consulted with a Queen's Counsel on the possible next course of action against Wall Street Journal. I won't claim to know what the counsel might have been but now that it's clear the USD700 million did NOT come from 1MDB [as the Wall Street Journal's article had led many to believe][read RM2.6 billion not from 1MDB] it's only fair to expect the first ever court action against WSJ by a Malaysian Prime Minister.

This morning on Twitter, I was told to read the WSJ article again and to do it properly. Nowhere in the article, I was told, did the WSJ accuse Najib Razak of stealing money from 1MDB and depositing in into his personal accounts. A fellow journalist provided this para from the original WSJ article to support this argument:

It's true, the WSJ did insert the above paragraph in its article. But a news report is read in its entirety for context. The impression that many Malaysians who are well-versed in the English language get when reading the whole WSJ article is that there is an attempt to link the USD700 mil that flowed to Najib's personal accounts and the 1MDB. Even the headline used was meant to make a connection, whether or not there was one: Investigators believe money flowed to Malaysian leader Najib's accounts amid 1MDB probe.  This was why the 1MDB had to quickly deny having given USD700 million to Najib and, similarly, why the PM came out to say he never misappropriated 1MDB funds of took public money for personal gain.

The CNBC report on July 3, based on its interview with Ken Brown, the WSJ bureau chief in Hong Kong, has the same impression about the WSJ's article:

The second para says it: "... movement of cash from 1MDB ... before it landed at Najib's accounts, directly connecting the PM to the deeply indebted fund for the first time, the WSJ reported".

Ken Brown never refuted the CNBC article which was based on its interview with him. Neither did WSJ nor Dow Jones. It was as if they wanted us to believe that there was a connection between 1MDB and the money that went into Najib's accounts.

Well, there is none now.

p.s. For the record, I must reiterate that I am never in favour of politicians sueing bona fide journalists (or bloggers). And I am wondering if the 1MDB is contemplating legal action against WSJ now that it's been vindicated by the MACC:

“1MDB welcomes the clear statement from the Malaysian Anti-Corruption Commission, which confirms that no funds from 1MDB were transferred to the Prime Minister.

We have always maintained that the company has never provided any funds to the Prime Minister as per our media statement on 3 July 2015, confident that the truth will prevail.

To continue to suggest otherwise, as PKR secretary-general Rafizi Ramli did in his blog yesterday, is highly irresponsible and a deliberate attempt to undermine the company.

This is despite 1MDB publishing  on 3 June 2015 a summary of what the RM42 billion debt has been used for, information that is fully disclosed in 1MDB's audited and publicly available accounts from 31 March 2010 to 31 March 2014.

We reproduce here the two infographics of the summary." 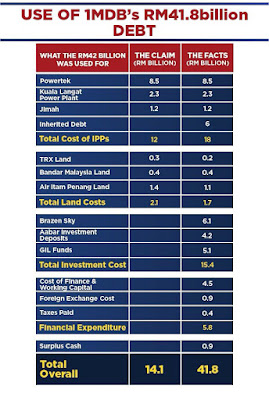 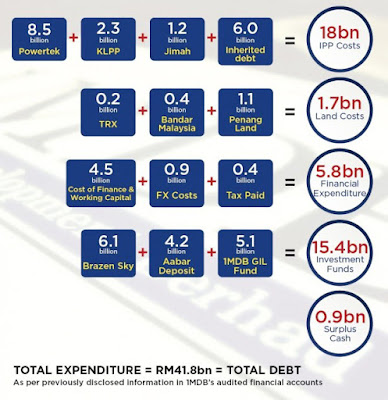