The "Gentleman" YB is back! 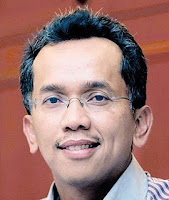 Two years ago, some people wanted us to believe that Shaziman Abu Mansor, who was Works Minister, had been "dropped" from Najib Razak's Cabinet. Well, I hear the man's back, recalled to fill a void in PM Najib Razak's Administration left by the late Jamaluddin Jarjis.

I used to be skeptical of this MP of Tampin but by opting to leave his ministerial post to focus son his Constituency after the last general election,  thus allowing others a shot at the Cabinet, Shaziman confirmed he was far from selfish, the kind of man a the Prime Minister badly needs around him now.

He once proposed a mandatory registration for bloggers so as to make everyone in cyberspace accountable for his action and word, but we were all dead against it [I'm a gentleman blogger, 23/8/2006] because we suspected it was a trick to curb freedom. With the benefit of hindsight, I think the idea was just a little ahead of its time.

Shaziman would fit right in if Najib decides to do a Cabinet reshuffle. Like right about now is the right time for that long-overdue reshuffle, seeing that we are exactly half-way the current 13th Parliament. Many people I spoke to think the PM should let someone else be the MoF (but not his younger brother Nazir). One CEO blogger says it should be this someone else.