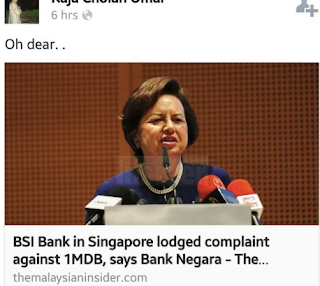 The above screenshot was trying hard yesterday to pass off as the real thing (see below). The aim of this screenshot, I guess, was to inflict the "Oh dear" effect on people, especially those who don't believe that things are as bad as some have painted about 1MDB. It's effective but ONLY if you are hopelessly gullible or/and because you wish those things about 1MDB to be real bad so you can bring down Najib Razak.

This is the real thing (you're welcomed, TMI):

Some people and I checked first and we can tell you without malice that the Bank Negara governor DID NOT SAY what the first screenshot claimed she'd said. Not that, to me, is malicious. Enemies of the 1MDB can crap on 1MDB but to try and implicate the BNM governor is unacceptable.

This is the Bernama report via Malaysian Digest:

Pic:BernamaKUALA LUMPUR: Bank Negara Malaysia (BNM) today confirmed receiving a report on 1Malaysia Development Bhd (1MDB) from the Monetary Authority of Singapore (MAS).
"They have announced sending the report to us. Yes, we did receive it," BNM Governor Tan Sri Dr Zeti Akhtar Aziz, said here today.
She was responding to a question on whether BNM had received the MAS report on 1MDB, particularly in relation to BSI Singapore.
Zeti said this at a press conference on the release of the Labuan Financial Services Authority (FSA) Annual Report 2014 here today.
It was earlier reported that MAS was in touch with Malaysia's regulators over investigations into 1MDB.
According to the report, MAS has also said that it was fully committed to assisting within the full ambit of its laws.
"The information will be extended to other agencies under Malaysia's jurisdiction," Zeti said, adding, the findings were highly confidential.
Asked if MAS had notified BNM that there was no cash being held by 1MDB in BSI Bank Singapore as alleged, she said: "We can’t comment on an individual entity.
"I have already stated that the international community will not cooperate with us if we release the information extended. Therefore, it will stop all investigations if we talk about it."
She said the arrangement is to maintain confidentiality.
To another query on whether 1MDB's loan default could possibly threaten Malaysia's banking system, Zeti said in general, when any entity took a loan from banks here exceeding RM2 billion, they would be on the watch list of the central bank to assess any systemic risk to the banking system.
Stress tests are regularly conducted and so far, banks in Malaysia have proven to be well-capitalised and financially sound, she reiterated.

So, Dear Readers, while there are a lot of crap going on in our corpoate world, perhaps more so than before, although there were lots before, I suggest we put on out bullshit indicator to detect a whole lotta crap that's being dished out on the Internet. 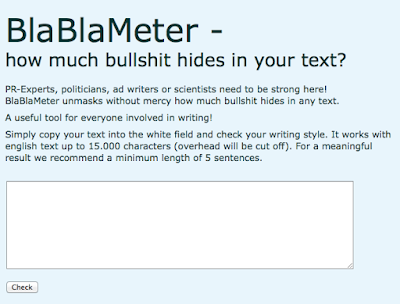 Another recent example is the write-up alleging the 1MDB top execs of snubbing the PAC. Turned out that 1MDB got the "invite" just a few days ago, NOT weeks earlier. You and I know the intention. Good thing Mr Arul Kanda didn' t take weeks to respond to the latest crap:

Media statement by Arul Kanda, 1MDBPresident and Group Executive Director
Issued on 26 May 2015
For immediate publication

Invitation for appearance before PAC


“Contrary to recent press reports and statements by certain individuals, we wish to clarify that it was only on 21 May 2015 that 1MDB received a letter from the Ministry of Finance, appending an invitation sent by the PAC.
This invitation, which was addressed to the Ministry of Finance, requested an appearance by the company before the committee on 26 May 2015.
Upon receiving this letter, 1MDB responded to the Ministry of Finance on21 May 2015, the same day the company received the invitation.
As confirmed by YB Nur Jazlan, Chairman of the PAC, the date for this appearance is currently being finalised, due to the date proposed earlier being in conflict with previously scheduled overseas commitments.
We once again reiterate our intention to extend our full cooperation to the PAC and both Arul Kanda and Datuk Shahrol Halmi look forward to appearing before the committee and having the opportunity to clarify 1MDB's position.”

IMDB and other affected parties should actively sue for each and every false and misleading statement publicly published by enemies of 1MDB.

Rakyat also deserve truthful and transparent facts from the enemies of 1MDB as much as the truths and transparency expected from 1MDB.

Dato Rocky, seems that you are trying very hard to defend 1MDB and Najib.
What is happening... 'terhutang budi' perhaps?
Pak Lah not as bad as Najib but you whacked him kaw-kaw last time.

It seems the MOF is not too discerning either: Why give only 5 days notice to those busy chief executives to appear before PAC? Or was it PAC's lousy scheduling? The administration of this country appears to gone off-track - passing the buck is now the trend.

Common la bro, stop trying to defend the shit that is happening.

Looks like Najib is trying to take over position of being the richest man in Asia. It will be hard, very hard indeed,, especially when he only has a quarter of the time that the repugnant and avaricious half breed Mahathir had as the PM of Malaysia. The difference between the two is Najib has an ambitious wife whereas the half breed has a very non interfering wife, or at least one that had never shown to get involved with the husband's decision on the running of this country, at least not in the open anyway. Of course what happened at home may be a different story altogether. Unlike the botok filled face and out of shape Rosmah, her eyes are now so small now as a result. Why kind she be what she was when Najib married her, surely Najib did not choose to marry her because of something else. Botok wasn't even in existence then, I am surprise that Najib is able to sleep with peace and someone that looks only like a half human.

Hey fake datuk...rizalman was caught with his pants down. Remember u tried to defend him. kakakakak.

Come on.. unless 1MDB is paying its CEO so bad that he has to stay in the jungle with no internet access, he should know that PAC was going to start the hearing months ago, and as a responsible national-crisis-originated-CEO should he not prepared himself, or as he put it, to clear the name of 1MDB. Does he really need to wait for the letter to act ? you know this is just plain nonsense.

I still can't figure out why is he not be forthcoming if everything is above board ? I will immediately jump as the opportunity to clear my name ...

Rocky, you can do better than this excuse at defending him ..

Rocky,
I sense there is now a momentum on tun side, day by day people are believing tun bullshit compare to your boss bullshit. Your boss bullshit are handle by stupid people and as such tun is winning. Tun is a smart cookie surrounded by smart machai. Your boss machai don't seem to able to hit a home run. I am enjoying this drama anyway but in any game is good to choose a side so we can root our favourite team to win. I am on tun side. Tun has the sympathy card he has yet to pull. Can you imagine what kind of reaction you can get when tun starts to cry during a speech. Killer effect.

The thing is I'm sure the PM detractors have nothing concrete that can bring him down. And they are playing a dangerous game by misleading the people and even the UMNO people to try to pressure him to go.

The sad thing is the one who lead the campaign is a self professed UMNO lover who reasoned that the democratically elected president of UMNO has to be brought down because of unproven allegations.

While we all love him for things he did for the country, we should be the one who decide whether the PM stays or not and not him and bunch of bloggers around him. I hope DSN won't bow to the pressure just to let them know that they can't have everything that they want. And please respect the democratic process of the party and the country.

Coming from the Biggest Bullshit Artist ...This article is a Joke!

I am a pro-gomen supporter, but I have lost all respect for you as a journalist, Rocky. I hope you are no longer going around claiming yourself as one.

Just cant wait to see all those crapist respond .
Offcourse they will spice up more crap to this issue .
It is good that Arul Kanda Abdullah is taking things positively and professionally .
Cant say the same with all those crapist .

Instead giving excuse of attend meeting why cant they just inform PAC that they need time to prepare?

Why give lame excuse? Its show that both of them have something to hide, have no trust , no confidence