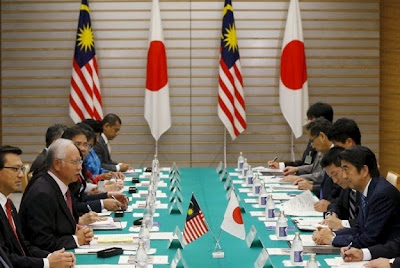 Puchong, 26/5: Tun Dr Mahathir Mohamad is in Japan for a follow-up on an eye surgery he had recently. Najib Razak is also in Japan on a three-day official visit. One advisor to the Prime Minister, when asked, said he did not know if the two would meet in the Land of the Rising Sun. Why did I ask? I was yesterday reminded that this very month in 2006, both the Tun and Abdullah Badawi, the PM then, were also in Tokyo. They were not having the best of relationships, too, and they had met briefly. The meeting went well but not the events that followed.

"I did not ask him to come and see me. I went to meet him. As a gesture of friendship, just to exchange greetings." - Dr M in 2006, on his meeting with the PM in Tokyo

The Pak Lah-Mahathir meeting led to a sharp decline in ties between the two men (and lawsuits involving their men). There would be all-out war afterwards that resulted, in 2008, the worst ever GE-on-GE results for the ruling BN coalition.

I doubt that Dr M and Najib would be meeting in Tokyo:, the Tun is in pain and the PM would be too busy with Shinkansen and the second phase of the Look East Policy.

But here's to wishful thinking ...