While Umno leaders/ex-leaders and their generals feud ...

Kill both: Bumi policies AND vernacular schools. While Dr Mahathir/Daim's team and the PM's men beat their war drums, allegedly, and an Umno VP's people led by an ex-cop, ex-convict, ex-Anonymous blogger try to push a more senior party VP into a corner ... the Malay Mail Online has this story about a Malay boy, whose parents probably benefitted from the New Economic Policy, demanding that these leaders abolish pro-Bumi policies and Chinese/Tamil schools as well.

The beauty and innocence of youth, I suppose. Don't get me wrong. I am in agreement with adik Fahmi Zainol, the president of so-called student group Anak Muda Harapan Malaysia, that "all Malaysians are equal; Muslim or non-Muslim, Malay or non-Malay". But I just don't think he and friends are going to get much support from the politicians, feuding or not-feuding.

Perhaps they should take politicians on the other side  ...

p.s. For Mahathir vs Najib: Shahidan to media, please read h e r e. For the VP vs VP juices, read Another Brick in the Wall's Hishamuddin disagrees with submarine purchase(?) 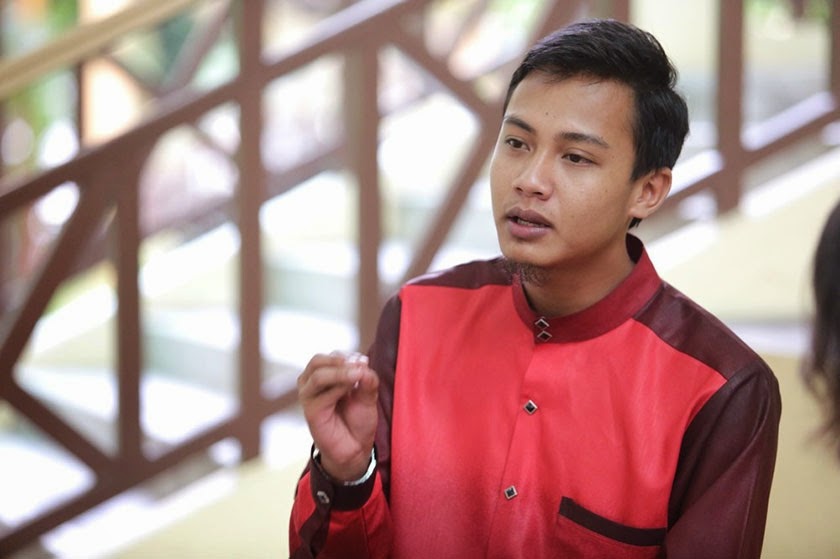 KUALA LUMPUR, Jan 26 — In a strongly-worded open letter to the prime minister and federal lawmakers, a student group demanded today the abolishment of the special rights of the Malays and vernacular schools to pave the way forward towards a “better Malaysia”.
Calling themselves Anak Muda Harapan Malaysia (AMHM), the six-member group comprises student activists from Universiti Malaya including its former student council president Fahmi Zainol.
Professing itself to be “a new liberal and moderate movement that seeks to bring all Malaysians together”, AMHM asked Malaysians to be “less sensitive in discussing national matters publicly” before making its bid for meritocracy.
“We truly believe that all Malaysians are equal; Muslim or non-Muslim, Malay or non-Malay,” the group said.
Among its lengthy list of 15 recommendations, AMHM pushed for the establishment of “a neutral and transparent commission” to review the need for pro-Bumiputera policies and amendment of Article 153 of the Federal Constitution which grants the Yang di-Pertuan Agong the responsibility of safeguarding the special position of Malays and Sabah, Sarawak natives and “the legitimate interests of other communities”.
“AMHM strongly advocate the abolishment of pro-Bumiputera policies, to be replaced with need-based, without any reference to neither race nor ethnic [sic].
“Pro-Bumiputera policies have clearly failed in distributing wealth equally, as wealth disparity among Bumiputeras are too high despite many state-sponsored economic plans,” it wrote.
Pointing out the discrepancies in the measurement of Malay success, it said studies have shown that 30 per cent equity holding for Bumiputera has long been achieved but the government has rejected the findings.
Such policies also induce “second-class citizen” feeling among the non-Bumiputera, it added.
The group also said the dual-legal system; civil and Shariah creates complications as it discriminates against certain parties in cases of child custodial rights, when a parent converts into Islam or for Muslims seeking conversions.
AMHM called for the abolishment of the Shariah courts but said matters relating to divorce and inheritance for Muslims should be dealt with by a Shariah division within the civil courts.
“AMHM strongly believe that Malaysia is a secular state and the Government should publicly declare Malaysia as a secular state,” it said.
The group also said that there should be public discussions on the question of state-secession such as in Sabah and Sarawak, which is now outlawed.
“AMHM strongly urge the Parliament to amend Article 2 to enable any future secession of states in Malaysia, if approved by a referendum in the referred state.
“Malaysia has seen a precedent in state secession when Singapore formed a sovereign state of its own. However, it was not done through a plebiscite,” the group said.
AMHM also said unity in Malaysia can only persist if there is single-stream education system.
It added however the quality of national schools should be improved and a trilingual policy should be made compulsory for all students.
There is also the need for Article 152 of the Malaysian Federal Constitution to be reinforced as it has witnessed the erosion of the Malay language and even federal ministers are also found to be lacking in the proficiency of the national language, it said.
AMHM also called for the government to declare Malaysia as a secular state as backed by Paragraph 57, Constitutional Proposals 1957 and public statement of Malaysia’s founding fathers; Tunku Abdul Rahman, Tun Dr Ismail and Tun Hussein Onn.
Taking a leaf out of the US government’s book, the group said the Malaysian government should set up an official web site for petitions on issues and if the threshold of 100,000 online signatures is met, the government should be obligated to respond to the issue.
Apart from Fahmi, the other members making up the group are: Ganeshwaran Kana, Atyrah Hanim Razali, Lee Jin Yang, Zawani Syafiqah Zainal Bahrin and Adam Fistival Wilfrid.
at January 27, 2015

These group of students are still raw and green. ..wait until you all graduated and enter the working world then you will see..and my advise to all of them don't work with the government as you all will be surrounded by Malays..try you luck with non bumi corporations. .if you ever had the chance...

I had to agreed for that .

wow. the constitution is there for a reason. agreed upon and understood. theres a story behind and a reason of which it is put there and written as such.

i may take it as his personal view on the matter but all view from parties involved should be taken into account as well. one cannot simply enforced his ideal just because he think it is supposed to be so.

if we are to simply disregard this then wht does it mean then when the constitution was wrote. its just only been 50 plus years since then. arent we forgetful bunch.

yet another apologetic, confused sense of justice action in play.

nobodys denying tht non muslim and non malay isnt the citizen of malaysia tht shares the unique privilege within Malaysia. ask those refugees who decided to be UK citizen but later come crawling back to malaysia after their request was denied.

im all about 1 school btw.

Rest of the idea?

No matter who are the group making the demands, I am always cynical when there's a lot of demands.

Suspicious that people tries to sneak in their real objectives among reasonable demands, making the other demands just smokescreen.

It's like telling lies, always more effective when they are mixed with the truth.

Bro Rocky who hardly rocking these days. What do you expect dude. Coming from barely there adult who probably still receiving pocket's money from his dad and living his campus life on government assistance. He thought he knew it all. This kid has a lot of growing up to do. It's like an aspiring newcomer who only days on the dance floor trying to teach MJ how to dance.

the 1 school proposal is excellent.

For Malaysia, i think we should apply 'water logic' when it comes to being fair to all races. Each race take and be given the sufficient amount to cover so that all rise to same level. Kenot tamaklah, kenot take more than you can banjir.

8. Perhaps we should bring more groups to represent the Malays to split the Malays voters more.

9. You tell me who will form the next government after GE14?

Lead by examples ? Now the "shitheads" are cookin' crackers. Tasty crackers or mass destructions crackers ? Which is which now ?

For that young fellas, theyre the supporters of a regime. Real world in Malaysia might not what they think. They dont read history. They never realise that those histories are coming closer to our maindoor again...

0h ya, do the malay fellas think Islam is equal to other fate too ?

Salam Rocky Bru, well firstly I am a bit delighted that the students being able to speak their mind.
I presumed this presesent the new political spectrum among the Y generation.
I wonder whether our educational system that provide for this new thinking.Are they politically right or are they being used of by the brighter political leader.
How do they entered our prestigious University Malaya.If you look at critical courses like medicine,engineering, pharmacist,if the pribumi are sick,then they have to go for oversea treatment,if you know what I mean.

Islam is just symbol and cannot be construed wider than that just limited to.inheritance , marriage and divotrce certainly a step backward.

I think we need to pray for our safety and prosperity otherwise we will be colonised worst than before.
Mr Chin Peng has ruled this contry for 21 days. I wonder what happen if the british were beaten by Chin Peng.
Will there be rulers, Islamic religion,Thanks god for helping us otherwise we will be godless and nationless. Until the day come the so called the liberal malay will know their fate.
Look at singapore what happen to the Malays.cant even pilot the plane because you are not good enough.You are good as carpet beggar.
My advise read the quraan,pray to Allah for protection,because that is the only weapon we have.
We can't even create the products like i-phone, whatsapp,instantgram ,ship, submarine. Honestly I think if Singaporec launche the attack to malaysia,we die like a frog ( no malacious intention but reality in life)
Look at Kuala Lumpur,if you remove Tabong Haji and PNB building, the place look like Hong kong of the east.
Luckily we have Malaysian Chinese who believe in reasonableness and willing to share some prosperity,we are able to taste a little bit development. Thanks God
If you are to read "The colour of Inequality" and Khazanah holding research studies,You may conclude we will soon be colonised.Islam........Ihope and pray to Allah to help and correct us. We are just too much and thankless to Him.
I rest my case Rocky Bro.
Just wondering Your Malaymail online is too opened, but the news paper sounds fair and your personal blog seemed to be in the middle.

It's high time they abolish those special rights of the Malays. That's the reason behind the different mentality and attitudes, and consequently the wealth, of the resp races there.

Very brave, very brave indeed. I have not thought secularism is an ideal amongst younger Nakaysians.