Why I have to support Mueller, like it or not. I am sure Mr Christoph Mueller will get lewd-er remarks when he reports for duty as Malaysia Airlines new CEO next year. The people of this country don't take too kindly to Malaysians who don't trust other Malaysians to run anything. It's part of our collective DNA as a people colonized by the Mat Sallehs for more than 500 years: all entities of national significance must be run and managed by Malaysians. The national carrier, the national car, the national electricity board, the national petroluem corporation, the central bank, etc.

But that's what Khazanah has done: appoint a Mat Salleh to helm our national carrier. This is the first time since the split of the MSA in 1972 that Malaysia Airlines will be CEO-ed by a foreigner.

The MAS trade unions have been clamouring for change for quite some time so they have no choice but to voice support for Khazanah's decision. 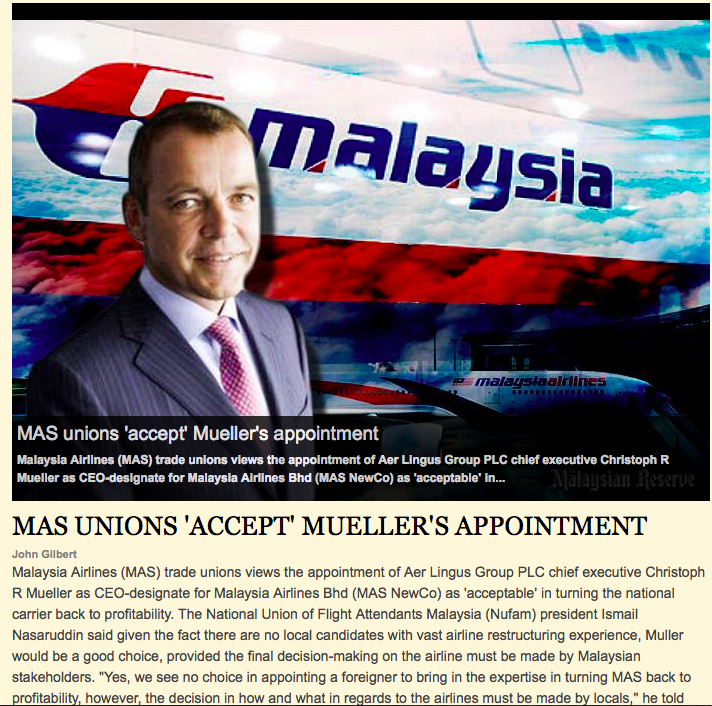 "We see no choice in appointing a foreigner to bring in the expertise in turning MAS back to profitability ..." Nufam president Ismail Nasaruddin.

Okay, so the unions' support is conditional: Ismail stressed that "the decision on how and what in regard to the airline must be made by locals" and that although although Mueller will have executive powers to manage the MAS Newco, local stakeholders and MAS unions must be consulted before ay major decision be made.

That's already a handful for Mr Mueller. But what really will decide if the German will succeed or not in turning MAS around is Khazanah itself. I mean, will Azman Mokhtar and Co allow Mr Mueller to do his job as CEO?

If Khazanah as major shareholder of the airline is going to continue to place political considerations before business (like not allowing the airline to cancel existing lopsided contracts because they are tied to VVIPs or not cutting jobs because the unions have access to the PM), there is going to be very little that Mr Mueller can do.

Good luck, Mr Mueller. As a Malaysian, I will fly and support the national carrier, regardless, so whether I like your appointment or not, you have my support.

*  In the TMR article, Nufam's Ismail says the union will be pushing the government to probe Khazanah Nasional and Penerbangan Malaysia Berhad on an alleged misappropriation of RM12 billion. Y'know, I won't be surprised if Ismail were to call for an Orang Putih to take over Azman Mokhtar's position and run Khazanah ...