Stupid moron. Okay guys and gals, I'm not calling anyone stupid or bangang here. I learn from our Prime Minister Najib Razak and Marina the daughter of former PM Dr Mahathir Mohamad: every time you call someone stupid, someone else will call you by the same name. So I'm not going to be the stupid and call you a moron. :-)

But I can't help but notice that Marina is luckier than Najib over this bodoh-bangang thing; her supporters came quickly to her defense and told her not to respond to the chap who called her the STUPID. Not quickly enough [by then Marina had dragged her dad, totally unnecessarily I must say, into it with the angry retort: "If I'm stupid it must be genetic"] but Najib did not have too many people supporting him to start with.

My comments to The Malaysian Insider were not used, I believe, probably because I was sympathetic towards the PM. I will come to that later but for now, read this "stupid" exchange on Twitter the day Najib said the Sedition Act 1948 will not be abolished but will be fortified instead: 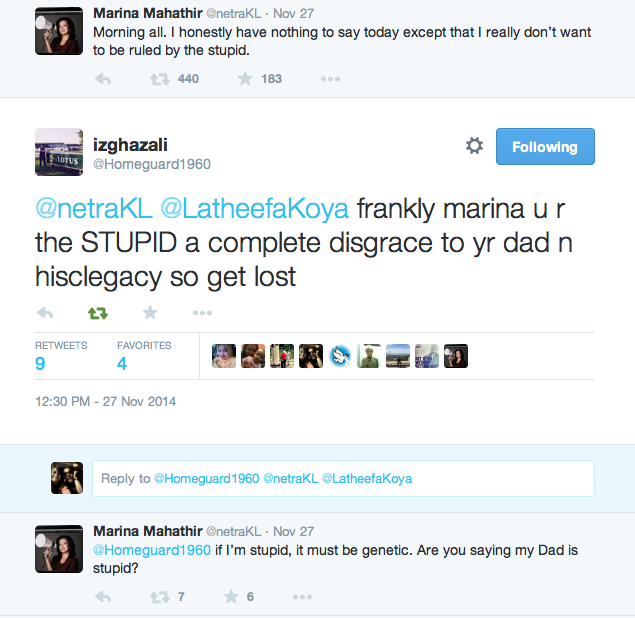 Is Marina calling Najib stupid? I don't know but The Straits Times of Singapore would be stupid not to highlight her speechless rage: 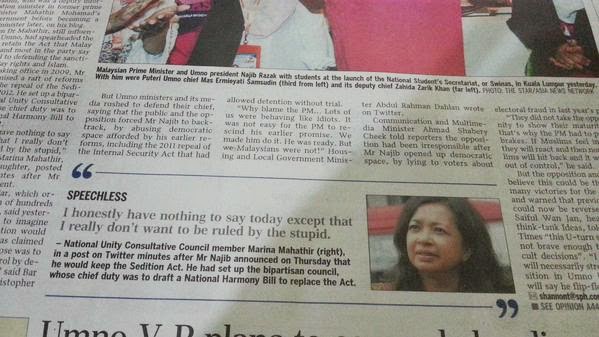 The Straits Times totally ignored the equally angry response by @izghazali towards Marina's "speechless … the stupid".

I don't know if I was stupid or what but I had to "talk" to this @izghazali chap so I sent him a direct message. And he responded!

I reproduce the most part of our exchange, with his permission: 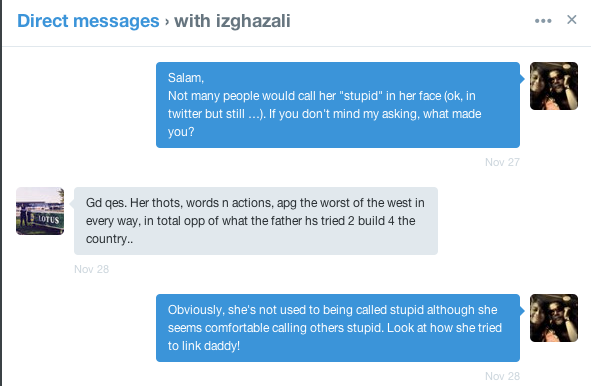 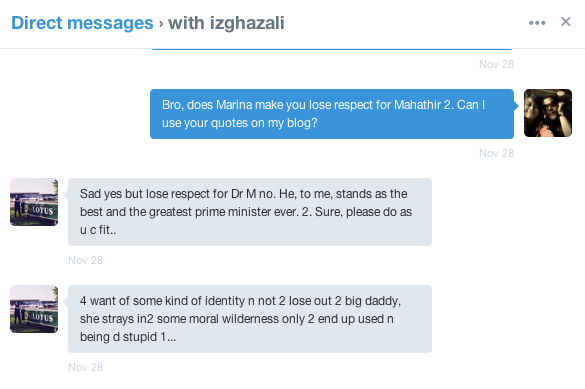 Now, as for the bangang comment made by the Prime Minister in his closing speech at the Umno General Assembly, I hope he does something now that he's been blessed with the knowledge. He can start by getting rid of the "handlers" responsible for those traitorous pro-Umno bloggers!

Those of us who have been blogging before 2008* have long known that 90 per cent of bloggers on the Umno payroll born after that year are either morons or non-existent. [I know some smart ones, like Parpukari and MiM; not all of them are on my blogroll]. When the Malaysian Insider reporter called me for my comments on Najib's bangang remark, I told the reporter I wasn't upset because what the PM was saying is true. Okay, maybe Najib shouldn't have used the B word ...

*2008 was the year Umno woke up from its slumber and recognized that blogs and the Internet are big and potentially lethal weapons. To be fair to Najib Razak,  he was the first senior Umno minister after the disastrous 12th GE to embrace us bloggers ...