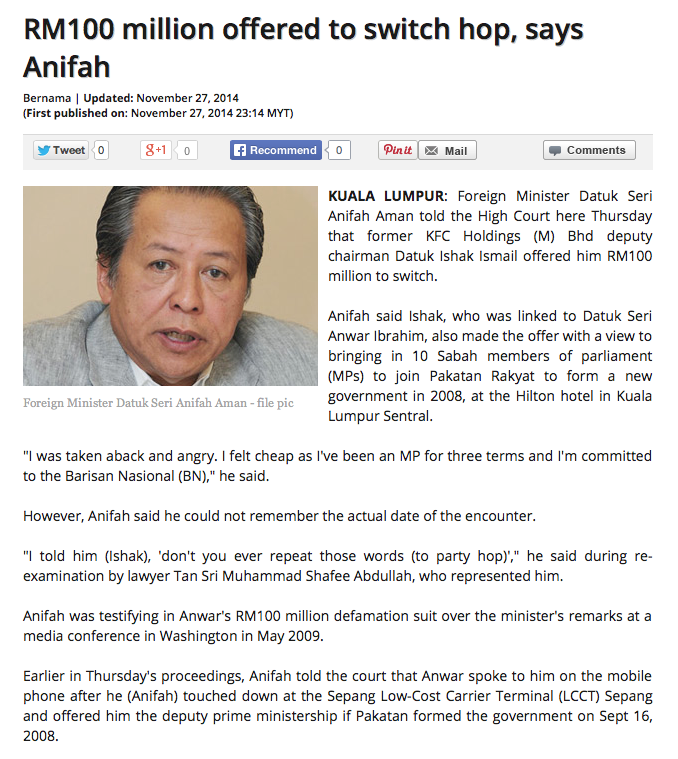 Sometime after the March 2008 general elections, Opposition leader Anwar Ibrahim very confidently told the nation that his Pakatan Rakyat coalition would have enough number of reps in Parliament by 16 Sept that year to form the Government. His supporters were delirious, lapping up every word. Even the staunchest of Anwar's skeptics were a little rattled by the boldness of the statement. I mean, you don't make that kind of pronouncement unless you are out of your mind or you really have some magic up your sleeves.

It would seem from on-going court proceedings in Kuala Lumpur to hear a RM100 million defamation suit against Foreign Minister Anifah Ibrahim that Anwar had something up his sleeves. In fact, he would really have been the sixth Malaysian Prime Minister if things had gone according to plans. If only Anifah Aman had agreed to an alleged RM100 million offer to ditch BN and jump over to Pakatan, that is ( or so we are made to understand from court news reports here, here and here) ...

The court hearing is on-going, so please refrain from commenting on the merits of the case.