"A terrible year is winding up with something that is very rewarding." - a Wisma Putra officer jots down on her Facebook after Malaysia won a place in the United Nations Security Council.


The blogger Big Dog has the story in Congratulations, Anifah.

I sent a message to say Tahniah to the Foreign Minister, who was the subject of my posting about the next Prime Minister of this country h e r e, and this is his response:

Most people would immediately give themselves a pat on the back and angkat bakul sendiri.
at October 17, 2014 15 comments:

Coming back from a 3,500km motorcycle ride in Thailand last week, I was so happy to see these dials at the first Petronas station (top pic) after the Malaysian-Thai border. For a week we were paying almost double the prices in Malaysia (pic below).

Funny thing is when I commented on my Facebook how fortunate and grateful I felt that our fuel prices are still cheap despite the recent 20 sen inrease, some people were unhappy. They said I should compare prices not with Thailand but with some other oil producing countries like Indonesia and Thailand. Well, I've Googled the information for them since it's such hard work. Click here for prices comparo with Venezuela and Indonesia.

Note that not even the oil rich Arabs can match Venezuela's as-good-as-free fuel but it comes with a heavy price. Read here. Coincidentally, a local expert published in The Malaysian Reserve, the business daily I'm advising, two well-researched articles this week on the curse on countries that heavily subsidize fuel at their pumps.

The myths of Petrostates: Is cheap fuel a blessing or a curse?

"Is he supporting KJ and Najib now?"

I tell them it is quite clear (at least to me) that that is not the case. In fact, I sense that Kadir (or AKJ as we reporters called him back in NSTP) doesn't seem to relish at all the prospect of KJ, the former Prime Minister's son-in-law, becoming DPM. But like it or not, AKJ says KJ has cleverly positioned himself as a frontrunner for the position. I don't even think Kadir is crediting Najib for Khairy's rise; on the contrary, it sounds to me like he's blaming Najib for it. You must know that Kadir is still qutie close to former Prime Minister Dr Mahathir Mohamad, whose son Mukhriz Mahathir is Kedah Menteri Besar and is seen by many as PM material and therefore a threat to not just KJ but also Hishammuddin Hussein.

If you ask me, I'd go with Mukhriz any time.

But if you ask me again not about these candidates but about the whole kepimpinan negara issue, this is what I really think: Mukhriz Bin Mahathir should not be DPM or PM. Nor should Hishammuddin Bin Hussein. Khairy sil/of Abdullah Badawi should never be.

Because, with due respect, why should we still be stuck with the children and in laws and daughters and wives of our ex Prime Ministers and ex Deputy Prime Ministers?

If we are to progress as a nation and a people, we must look beyond the dynasties and clans that exist and consciously disqualify sons, sons-in-law, daugters, daughters-in-law and, for that matter, wives of ex-PMs and ex-DPMs. That means Hishammuddin Hussein, Mukhriz Mahathir, Khairy Jamaluddin, etc. We must consciously expand our vision and find a new leader from outside these great clans to take the nation higher and farther.

We are a nation of 27 million hightly literate and educated people. Surely we got talent.

Rahman Dahlan, for example. He's young, he's from Sabah, and he's proven to be a very capable Minister. Not as good looking as Khairy but he's smart and he is savvy. Of course, if you ask me, my candidate for the next Deputy Prime Minister would be the quintessential Sabahan Anifah Aman, the younger brother of the current Sabah Chief Minister. In fact,  I am surprised that Najib Razak hasn't named his charasmatic Foreign Minister as his second Deputy Prime Minister yet!

How about Shabery Cheek? At 53, he's matured like as a politician and an administrator. Not Oxbridge material like KJ but people forget that he was a ferocious student leader and has gone through the mill, from mainstream Umno to a splinter within the party and to where he is today. As Information Minister, he's hands-on and knowledgeable.

Melaka's young and new Chief Minister Idris Haron is up-and-coming. A lot of people thought his predecessor's shoes would be too big for him to fill but Idris has done quietly well. Unlike KJ, he came from a poor family and feel them. He needs to be more more media savvy like Khairy though. And, please, if Idris can get them to bring down half the posters with his photograph around the state, there would still be half too many!

And shoot me, you dare discount Azeez Rahim? Say what you like about this former used car dealer, he's come a long way with guts and grit. A natural orator, a champion of causes, even Dr Mahathir thinks Azeez can get a job done where others fear even to thread! "Azeez ni berani jugak," the Tun told me recently. Kinda of remind me of the late Ghafar Baba. Did you think then Ghafar would make DPM one day? Quoting Kadir:  "Dalam politik tidak ada yang mustahil. Yang tidak masuk akal pun boleh berlaku."

After 20 years, Petronas conquers Formula One 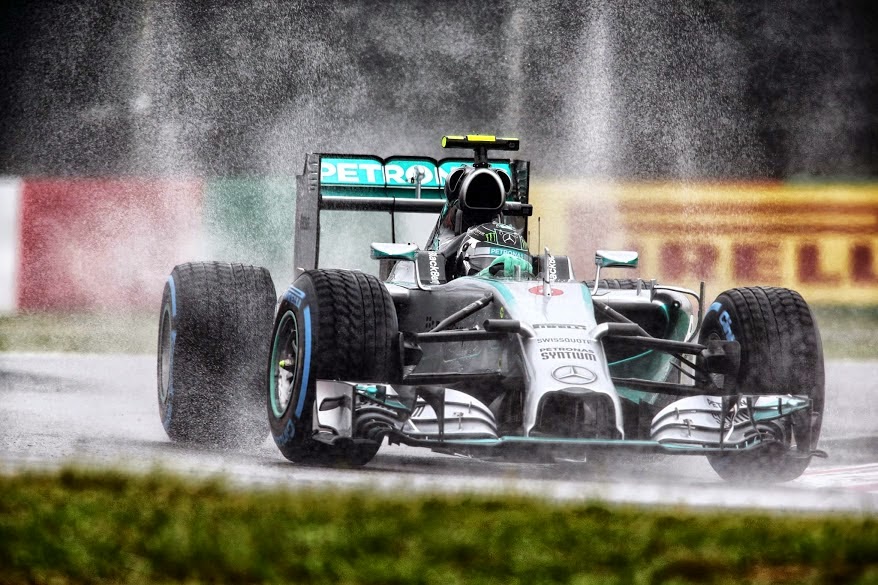 It's OUR success story, too. Call it vision, perseverance, faith or all of that. After two decades of chasing podiums in F1 circuits around the world. Malaysia's oil corporation Petronas this week attained the ultimate glory of claiming the constructors title - with Mercedes - for the F1 crown. "This is truly a historical milestone for Petronas," says its CEO Shamsul Azhar Abbas h e r e.

Indeed. For as long as I remember, Petronas has been whipped left, right and centre for its investment in F1, the world's greatest auto racing circuit. Even this blog had suggested back in 2009 that maybe Petronas should have just pulled out like Honda had just done [Petronas should do a Honda, 7/12/2008]. OK, so I wasn't a big F1 fan but even big names like BMW, which was Petroans's partner at one time, turned their backs on the circuit, citing rising costs. Tony Fernandes tried to weave his magic wand in F1 via Lotus only to burn fingers and hands (not neceessarily his own). Proton, the national car, got tangled up in the same misadventure (plus a lawsuit or two with Fernandes, too!).

Shamsul and the Petronas motorsports division should crow about this achievement and share with fellow Malaysians why this is a historical milestone and a smart partnership for the national oil corporation. Hit back at the crtiics. Inspire the rest of us. For this is not just a Petronas success story, it is ours as well.

p.s. Of course, we couldn't have done it without Dr Mahathir Mohamad, the Petronas advisor. In 1999, when he was Prime Minister, Dr M brought the Formula One to Sepang (and Sepang to the world stage), a move his opponetns deemded as wasteful. Many years later, the sucess of Sepang inspired even our neighbours down south to bid for and stage the first night race ...

The thing that's been enticing Daphne Iking these days ...

TRAFFIC WOES : I'm pretty sure it's also been bugging many of you, too!

(Easily) The best analysis on the latest subsidy cut

With Subsidy Cut, blogger HishamH has penned what I think is the best defence of the 20 sen increase in RON95 and diesel prices. The latest increase, he reminds us, has put Malaysia on the verge of abolishing the fossil fuel subsidies entirely. The quantum is reasonable and the timing couldn't have been better, he argues:

If support for the disadvantaged is the goal, subsidies for petrol and diesel are an incredibly inefficient and wasteful way to go about it. Most of the benefits of energy subsidies goes to higher income households, not the lower income group ... On average, the top 20% gain six times more from energy subsidies than the bottom 20%, and that petrol subsidies are the most regressive (i.e. the benefit climbs higher the higher your income level). Cash transfers are a far more efficient and effective way of supporting the poor.

HishamH makes mincemeat of DAP economic expert Chong Zhemin's attempt in No Reason ... to compare Malaysia's increase in fuel prices with a reduction in India and the UK. Basically, he's saying that Zhemin is trying to chong the readers lah.

For years now bloggers like HishamH, SatD, Jebat Must Die, A Voice, Big Dog and even Bujai, to name a few, have been helping the government explain its economic policies and defend the execution of these policies and they are still doing it despite the fact (yes, it is a FACT) that the government spends hundreds of millions of ringgit on clueless consultants, PR agencies and e-con advisors. I wish the government would see that: saving a few million bucks so that you can splash it stupid is not on. One day these bloggers will grow tired of you. Like Annie says, we ain't superheroes, man!

The next Editor-in-Chief of Bernama

Those who know seasoned journalist Datuk Yong Soo Heong know that beneath this gentle sumo is a fearless professional. His encounger with the "real" Lim Guan Eng back in 2008 remains one of my favourite tales when I am trying to prove that journlists' ethics are quite different from politcians' [I did it in good faith, 13 March 2008). Yong retires from Bernama at the end of this month as its General Mananger. As per the unique tradition at the national news agency, current Editor-in-Chief Zulkefli Saleh should move  up the ladder and fills Yong's shoes.

Now, who will replace Zul as the head honcho of Bernama? Now that's very intersting at this time beacuse there is no clear favourite, I believe. There's Dr M's former press secretary Zack, National Press Club president Mokh, seasoned business journo Mike, among others. Or will they get someone from outside Bernama to try and boost the agency's fortunes?