Alias Aziz the MAS Employees Union chief, has gotten what he and his union wished for so I see no reason why he should be whining. In May, merely two months after MH370 vanished, Alias repeated the union's demand that the airline be restructured,  telling no less than PM Najib Razak himself that the national airline was losing money because the top management lacked the experience in running airlines (Union calls for PM to shake up airline).

Alias has gotten his wish granted (Khazanah to take over MAS) so he shouldn't be bitching, right? Wrong.

Yesterday, he claimed that he was NOT informed of a meeting called by the Mas management with the unions. Did he lie?

See the claim he made and an internal record that says otherwise:


MAS Employees Union in the dark

PETALING JAYA: MAS Employees Union (Maseu), the biggest union of the members of the airline, said that it had not been invited to attend the briefing by the chairman and management yesterday.
“They did not write to us to notify us about the meeting. I have not received anything,” said Maseu president Alias Aziz when contacted yesterday.
Maseu is the most vociferous union and in 2011 had successfully lobbied to unwind the share-swap agreement between MAS and AirAsia Bhd.
Of the eight MAS unions and associations, only Maseu representatives were not at the briefing yesterday. - Ends

Here's the record on the 2 min 24 sec phone conversation purportedly to inform one Alias Abd Aziz about the meeting between the managment and the union: 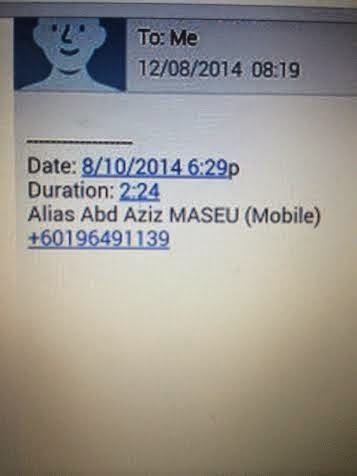