Cacat lagi haram. Lawyers of Khalid Ibrahim, the Selangor Menteri Besar who was sacked from Anwar Ibrahim's PKR on Friday in a reckless, shameless move to replace him with Anwar's wife Wan Azizah Ismail (who happens to be President of the PKR and poised to replace Khalid if/when he goes), have described his sacking as not only cacat (flawed) but haram (illegal) as well ... 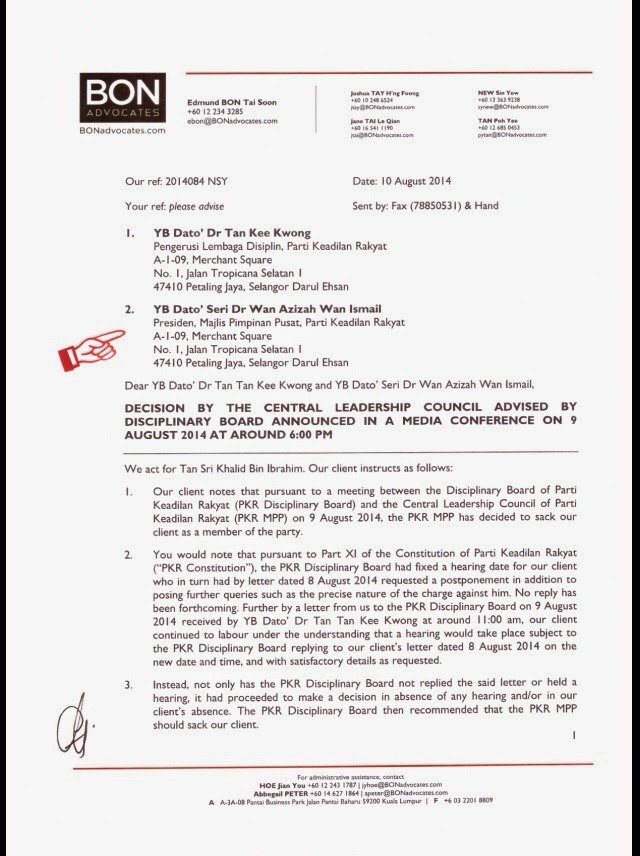 Excerpts from lawyer Edmund Bon's letter on behalf of his client the MB to MB-wannabe Wan Azizah yesterday:

4. The disciplinary process against our client smacks of impunity, abuse, pre-judgement and bias for the following reason:

4.1 The PKR Disciplinary Board has:

a. convened a disciplinary process on short notice
b. failed to specify with sufficient clarity the charge(s) levelled against our client

c. subsequently called on our client to answer 5 new issues which were not in the show cause letter

d. not replied to our client's request for postponement
e. failed to provide details as to the composition of the PKR Disciplinary Board

f. convened a disciplinary hearing in absence of our client
g. been chaired by YB Dato Dr Tan Kee Kwong, who himself is under inquiry for alleged mismanagement of funds under the Skim Mesra Usia Emas

h. proceed to recommend that the PKR MPP (Central Leadership Council) sack our client without hearing our client

a. failed to take into account the flawed and illegal disciplinary process by the PKR Disciplinary Board

b. taken into account matters not contained in the show cause letter such as the Selangor water restructuring, increase in the Menteri Bessr's allowance, increase in business license taxes, Kidex

c.  Allowed members who have vested interest to sack out clients given that:

i.  YB Dato Seri Wan Aziz Wan Ismail has purportedly been selected to "replace" out client as the Menteri Besar of Selangor

ii.  Members of the PKR MPP have entrenched their positions by making wild and spurious allegations against our client which would be difficult for them to retract now

iii. Members of the PKR MPP have further endorsed the distribution of a defamatory "dossier" of our client in an attempt to compel his ouster

5. It is imperative to note that the total time taken from the date of the show cause letter of 5 August 2014 to the sacking of our client is less than 5 days

Clearly,  Khalid's lawyers are getting ready to file the Mother of all Lawsuits to defend the integrity of their client and the Menteri Besar of Selangor. As a resident of this once proud and rich state for the last 30 years, I am so tired of the antics of the Pakatan Rakyat politicians, from Anwar to his don't-mind-to-be-called-puppet wife, to Rafizi Ramli and their cybertroopers.  I think this is the last time I'd be writing about this kemelut Selangor. I would like to shift my focus on Penang and Johor, states run by damaged goods ...