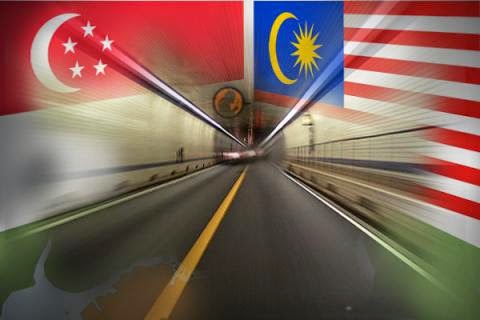 Blogger A Voice is in favour of a Malaysian tit-for-tat on Singapore for the latter's move to impose ludicrous amount of money on foreign (read Malaysian) vehicles entering the republic via Johor. I am with A Voice all the way here, as should all Malaysians: why shouldn't we impose equally ludicrous amount of money on foreign (Singaporean) vehicles entering Johor via the Causeway and the Second Link?

The key thing here is equality: if Singapore wants to almost double the Vehicle Entry Permit and increase its Goods Vehicle Permit by a whopping 400 per cent, we should do the same. Transport Minister Liow Tiong Lai must show to the Singaporeans that we aren't wimps. Read Singapore could tac but Johor not allowed to tic.

Malaysia has open door policy , encourage foreign to do anything the like ,even to the extend of taking up their land , in the name of investment .
Who benefit ?, only God knows .

Because there are more cars going into Johore and most of them are Singaporean who came in to SPEND money as compare to those who go into Singapore. Charging the Singapore cars will mean less overall spending in Malaysia but won't prohibit Malaysian from going into Singapore.

Its time for Johor to implement the new rate. Its been a long time since win-loose situation in the era of water supply.

Since petrol, diesel and goods are concerned, the exchange is not being favorable. Let them pay accordingly including the h/way tolls.

When Singapore tit, Malaysia should tat,tat. Because our Ringgit doubles to get a Sing Dollar. This argument about to charge S'pore registered cars as what they're charging us has been going on for years. The problem lies in the Transport and Tourism Ministries. Both Ministries were represented by MCA all these years and always the excuse used was this will effect tourism. What a lame excuse. look Dubai authority charges 15% tourism tax for everyday you rent a room in their hotels now, still millions of tourist goes there to see the tallest building in the world Burj Khalifa, Biggest mall in the world, Dubai Mall, Desert Safari etc.

Do you know, hundreds of thousands Singaporean has purchased MACS sticker (Malaysia Automated Clearance System) which has a chip on the sticker and this sticker is put on the cover of S'pore passport. When the user arrives at the Immigration check point, they don't have to surrender their passport for manual stamping. They just wave at the reader and their entry is recorded on the Jabatan Imigresen Malaysia system. This is the invention of a Malaysian company, Iris Corp Bhd. for Jabatan Imigresen Malaysia. Until today the company have yet to receive payment because these sticker and devices was not budgeted for. Jabatan Imigresen Malaysia has sold hundreds of thousand stickers for RM30.00.

I've got nothing against the Singaporeans, I'm against unfairness, I'm against the negative attitude of our authority, I'm against Ops sikap, all kind of ops but what about oops Singapore car that broke the rules all these years. Don't you think its not fair penalising your own people and foreigners gets off free.

Singaporeans are learned people, they know to pay for services rendered but our people are not that learned enough. I wonder ?? when ??

The latest move is targeted at Malaysians who drive their cars daily to work in Singapore. But even after this increase, it is still cheaper to drive a Malaysian car on Singapore roads.

It has been a double whammy for Singapore citizens. It cost a lot more for him to own and operate a Singapore car while a Malaysian gets to pump subsidized fuel in Johor, then operate his cheaper Malaysian car in Singapore while also earning the same Sing dollar working here.

Too bad Singapore gomen tackles most difficulties by dollars and cents

If the MACS (Malaysia Automated Clearance System) sticker has been bought by almost 500,000 Singaporean frequent traveller to Malaysia for RM30.00 each sold by Jabatan Imigresen Malaysia. What the heck is our Government doing ?

That shows they're willing to pay for any services, the same like we Malaysian must pay when we're in their country. Why do we allow ourselves to be bullied all the time. I miss Tun M.

FULLY AGREE WITH Anonymous11:27 pm ABOVE! Gomen jangan makan gaji buta! DO SOMETHING!

I opine the better view is ' it makes commercial sense " to impose certain levy or fee or charges. Singapore's main motive is making money.Circumstances in Singapore are different from Malaysia.We cannot follow the same steps all the time what Singapore does. The steps we take suit our conditions, poltical too.

Anon 6:05 pm go back to your tempurung lah. Continue selling your goreng pisang. We are too advanced for you.

That's ok Anon 1145, let them spend theirr Singdollar in Singapork ... But I don't think then spore government would want that. If sibgporean voters can't speed on Malaysia's beautiful roads, can't litter and eat gums in this land of free, and cannot eat our excellent food, they may rebel and go against the Government and vote out PAP. No no no. I am sure Spore govt will try and get out of this one.

Bru thanks for your response (1210AM). I really enjoy the fun exchanging view with you. Btw I think those people from Sin city who have bought a house in JB and travel daily across the causeway will curse and swear on this increment. Those who have the plan to buy one might change their mind. This will help to control the high cost of house ownership in JB which local Johorean are complaining. They are finger pointing to their neighbour from tiny island for this problem yet forgetting their glutton developers who built these property and target people from the tiny island as their market.

I notice that you are circumspect enough not to mention the local partners of these "glutton developers".

Why so coy? Name names, and let the chips fall where they may (on Bru's shoulders in this instance - maybe).

Anyway, why is there a big hoohah about Singapore's decision to increase the VEP and GVEP fees?

It's within their sovereign right to do.

What happened? Some petrol stations in Johor are quietly selling Euro 5 diesel and targeting this at Malaysian-registered commercial vehicles that ply regularly between Malaysia and Singapore.

I seem to recall that Tun Dr Mahathir insisted that it was Malaysia's sovereign right to build a " crooked bridge" to replace that part of the Causeway in it's terrirory.