The "Takashimaso" Incident: Why Anwar owes Tokyo, Anifah and L.Koya an apology

Updates 22 Jan:
Convict Visa: This blog isn't alone in thinking that Anwar owes the rakyat and Wisma Putra an apology for his latest antics. The link to the story below h e r e. 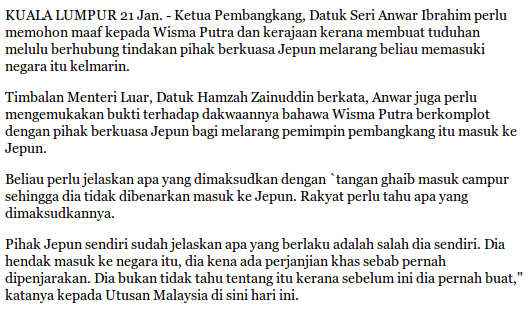 So, the real reason why Anwar Ibrahim was not allowed to enter Japan the other day is ... he DID NOT apply for the SPECIAL PERMISSION required of ex-convicts to enter that country.

The Malay Mail has the story:

So now we all know that it's yet another Anwar's own screw-ups, we can only hope the Opposition leader would do the right thing and apologize to the following:

1. The Japanese government and people for insulting them. The mere suggestion that Japan could or/and would bow to Wisma Putra's pressure and demands is a major insult to that
sovereign nation and her proud people.

2. YB Anifah Aman and Wisma Putra. Anwar really should stop accusing the Malaysian government for his own shortcomings.

3. Latheefa Koya. For making her issue that statement yesterday, which really does make her look like an idiot. Kesian.

“The barring of Anwar Ibrahim from entering Japan raises serious questions on the involvement of this government.” - Lateefa Koya