Tell your CM to return the car, YB

Rafizi Ramli's predicament as an ambitious newcomer in Pakatan is he couldn't have come down hard on Lim Guan Eng even if he had wanted to. That's because the Penang Chief Minister is way "up there" in the Pakatan hierarchy; in other words, well above the Pandan MP's pay grade

So the best RR can do is gently criticize the DAP strongman while making sure his comments h e r e are couched with lines like "it's a good investment", "people will eventually accept the decision", "Lim is more than able to defend the purchase", "the Merc is a steal", etc etc. All of which only prove that Pakatan politicians are still politicians, they will bugger you if you allow them to.

RR must tell Guan Eng to return the big Merc, as simple as that. Or else, it won't be "one or two weeks being whacked by the media". If the CM is a man of his words, he must to the right thing. It's not merely a matter of bad PR or bad timing, as Rafizi might want it downplayed - it's a matter of principles. If I may paraphrase LGE, "Pakatan must do the right thing ... the people are suffering."

See Para 4 of the Bernama article and the Edge's report (sourced from RPK: LGE criticized Terengganu government for purchasing Merc in 2008) 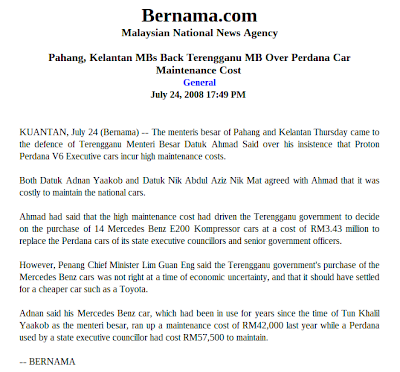 The Edge Daily (Pub Date: July 25, 2008)
Lim: Unwise to spend RM3.42m on Mercs
PENANG: It is not wise of the Terengganu state government to spend RM3.42 million to buy 14 Mercedes Benz E200 Kompressor limousines, especially at a time when the people are reeling from rising living costs. Instead, moderation should have been exercised.
Chief Minister Lim Guan Eng, who expressed these views to the press yesterday, however, agreed that the quality of a Mercedes Benz was better than that of a Proton Perdana V6 Executive. The Benz’s maintenance costs were also lower. He said that the Penang state government had cancelled the order for five new Perdanas worth over RM600,000 and decided to use existing vehicles.
“We decided to make do with what we have to save cost as long as the car can move and reach the destination. Even the state secretary (Datuk Jamaludin Hassan) had complained that the Perdana has incessant gearbox problems and a leaking roof but that should not be an excuse to splurge.
“They could have even purchased Toyotas. They are the leading car brand in the world, overtaking even General Motors and are much cheaper than Mercedes Benz,” said Lim. He said Umno should practise what it preached. “Umno must do something about this. Its leaders are living luxuriously while the people are suffering,” he added.
The Mole has the story: Not good for the goose but good for the gander?
Agenda Daily's Manyak Syiiok maa ... 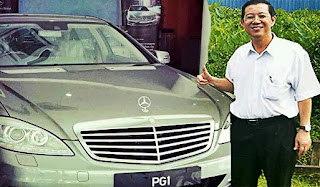