Confirmed! Malaysians are one gay people 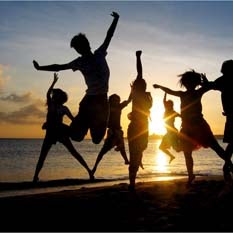 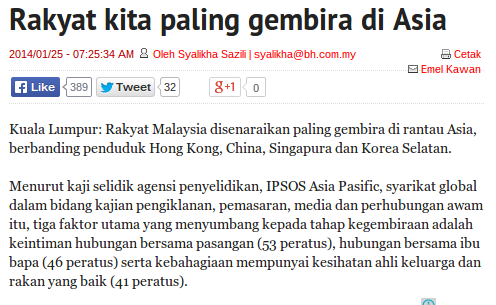 A happy filler in Berita Harian this morning. The findings of the survey, out in Nov last year, can be found h e r e.

Of course, there will always be people who are not happy. But in Malaysia they form less than 10 per cent of the population, says the survey 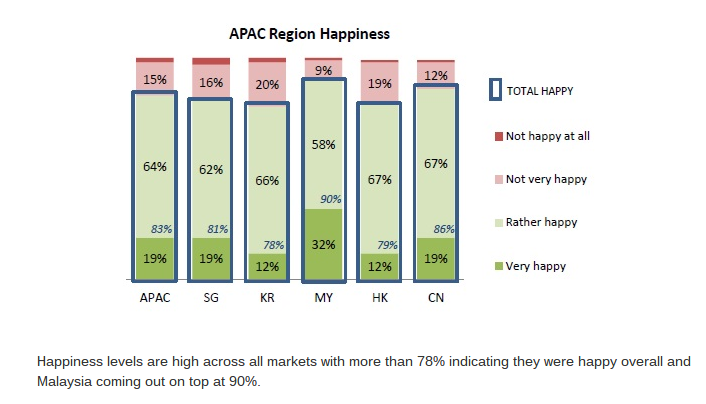 Happy with the survey?

Bro. Rocky,
You bet the samples are taken mostly from 2ND CLASS AND 3RD CLASS CHINESE CITIZEN MILLIONAIRES of Malaysia who live mostly in Penang & Damansara & PJ & Bangsar headed by their tokong with Mercedes number plate P1G!! Sure they are sadistic happy lot... with daily oppression by the Malay government, etc.

Malaysia is really a blessed country and that's why most of its people are happy. We only need better and capable leaders and good governance to make us happier.We really should be on par with developed countries with all our resources and riches.

Why Stop at Asia?
Why Not Happiest in the World!

Rocky has the Knack of finding some remote dubious survey to promote his Political Masters!!

Please go to the streets and ask lah!
Go to the cramped hospitals ..
Go to the poor ....
GO to those lining up to sign forms for their 1Mfree dough..by those unemployed ...
Then you ask if they are happy...

your commenters form the 9% of the unhappy Msians!

I am unhappy,p. unhappy that this nation has a weak leader. Unhappy at those who perceive inequality. Unhappy at the content of the sejarah subject.

If i were unhappy at the fact that my dumb forefathers brokered a deal, that enabled shiploads of opium smokers and shiploads of socially ostracised people by their same coloured kin, would it be just?

I am unhappy that the descendants of these shiploaders are so ungreat and unjust in their demand. Despite making the majority in acquiring equity, they still believe they should get more?

What these descendants need are a lesson in history. They should acknowledge that anywhere else, i.e australia, doc martens would be shoved up their assholes by skinheads who in the beginning were merely shiploaders too. Malaysia is the land of the people whose name form the 5 initial letters.

The bottom 10% unhappy would be made up of chinese.
99% of those leaving this country also happens to be this same breed.
Dwindling minority, dont let the door hit you on your way out.

It shows having among the world's highest GDP does not translated into happiness to its people. Your fellow countrymen still happy no matter how tough the goings.