Siti to KJ: No need to be impertinent 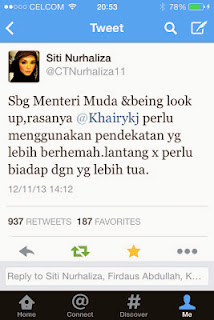 Bi-a-DAP. The Malay word biadap basically means rude and has nothing to do with a certain political party in Malaysia even though a lot of leaders from that party are known for their biadap-ness. Not is the lack of good manners and basic courtesy confined to just politicians. Kurang ajar is another strong Malay word to describe impertinence but in this case it also suggests poor upbringing (kurang means not enough and ajar means to teach). If you accuse someone of being kurang ajar, you'd better be ready for a serious (and sometimes physical) backlash as you are not just insulting the person but his/her parents as well.

For Malaysian diva Siti Nurhaliza to publicly (via tweet to some 1.2 million followers) tell an up-and-coming politician Khairy Jamaluddin that there was no need for the "young Minister" (Siti is younger than KJ, actually) to be biadap when dealing with someone older is something we don't see or hear every day. It's amazing that she chooses biadap and not kurang ajar; it  shows that she means well. It also reflects her excellent upbringing, or excellent command of the language, or both.

In any case, I'm officially a follower of @CTNurhaliza11 now.