Updated:'
More postings on Ramli Yusuf vs "All the Rogues":
1. The Unspinners [Susah percaya Ramli Yusof tak perasuah], who recalls earlier postings on the ex-cop and his run-ins with the A-G and ex-IGP, with a little help from his friends
2. Big Dog proposes the setting up of a committee to investigate how Ramli had accumulated so much wealth with so little [Doing due diligence on the Dato'].

p.s. I was made to understand that ex-IGP Musa Hassan, one of several named in Ramli's suit, had also made a Declaration of Assets when in office. It'd be nice to compare the wealth of the two ex-cops ...

Ramli Yusuf, who is suing the Government + Attorney-General Gani Patail + ex-Inspector General of Police Musa Hassan + MACC + "all the rogues" (to quote Din Merican here), will have a lot of explaining to do, if documents pointing towards his assets which appear in blogs the last few days are to be used against him.

Last week, a new blog Justice for the Ram started a series of postings (FIVE so far!) apparently in support of Ramli. It appeared on my radar after The Benchmark, one of the few on my Blogs-That-Rock roll, reproduced 12 pages of documents which appear to be a Declaration of Asset by Ramli himself. Read Benchmark's posting Ramli Yusuf - Lebih Bersih Dari Kain Kapan.

If the documents are genuine, they would suggest an amazing, even world-record-breaking, financial feat by an individual earning less than RM10k a month (RM18k plus, if combined with spouse's income). Ironically, these docs first appeared in Justice for the Ram.

I reproduce one sheet as teaser: 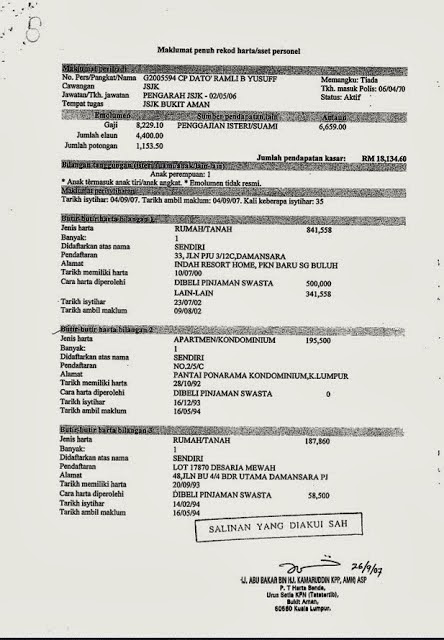 I was told that our anti-graft men opened a file on these assets but never did get to close it. What or who's to stop the MACC now from finishing what it started back then?

p.s. When asked about the suit, Ramli said he was doing it for the men in blue. 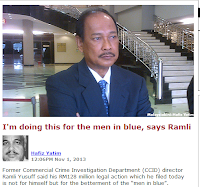 Well, I have a suggestion. Instead of suing the Government, Ramli should conduct courses for police officers on how to accumulate great wealth with their meager income. That would really help.