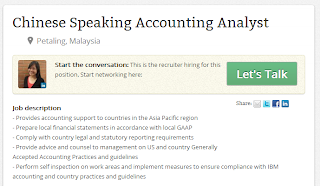 Job ads from the Republic of Malaysia. That was the title of the email containing job ad samples above sent to me by a fellow journo-blogger after the recent editorial exchanges between Shamsul Akmar and a Michael Lim Mah Hui, the "Bumi-no-quality" analyst. Lim has denied having made those racist remarks attributed to him by the Malaysian Insider. Dr Awang Hitam, a columnist with NST (and lately with The Mole) says he'd take that denial in good faith but stresses that unfortunately, the notion that Bumiputeras are unsuitable material for the private sector IS pervasive ...

"... there is empirical evidence on discrimination in the private sector against Malay candidates.


They concluded that race, much more than résumé quality, affects prospects of getting an interview, with Chinese significantly more likely to be called for interviews than Malays. In other words, while qualification matter, race matters more. Interestingly, their study also finds that even crucial skills such as proficiency in Chinese dialects only marginally increase the chances of Malay applicants in securing a job interview. These inconvenient facts, must not only be acknowledged, but speedily dealt with."

Read Ethnicity and Quality by Dr Awang Hitam, courtesy of the Mole.