Tunnel. When Dr M built the North South Highway, the KLCC, the KL International Airport and even the Penang bridge, they called them mega projects. They were even behind some of the protests against the construction of these infrastructure. Now, a single monster project by the Penang state government may beat all of Dr M's so-called mega projects put together. Ironically, these are the very people who've been dead against all mega projects before.

The price of having the Penang tunnel will, in effect, exceed RM30 billion. One massive project dependent on another massive project. That's according to fz.com, the business portal owned by The Edge. 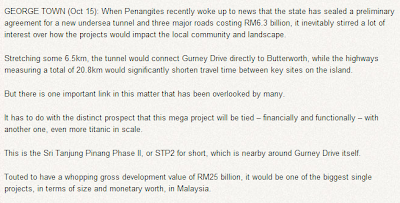