With updates at the end of this posting...
Better late than Never. This PEMANDU press release is dated last Thursday, 5 Sept 2013, the day after my posting Hot Stuff at PEMANDU drives bloggers nuts. The Mole published it H E R E only yesterday, 9 Sept 2013. I was wondering why the time lag ... 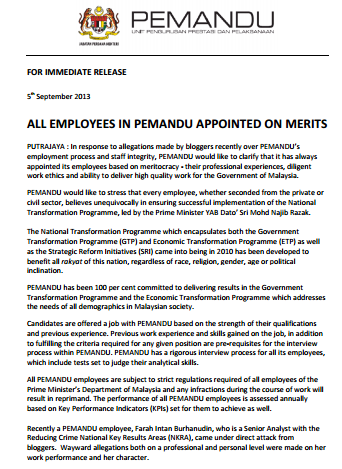 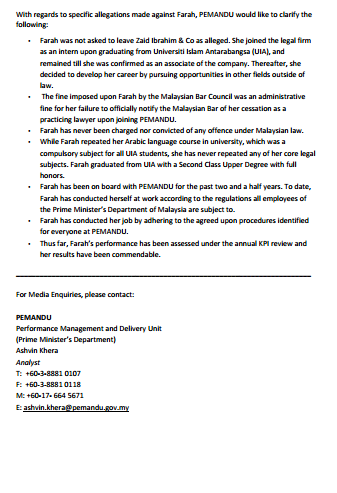 Well, apparently, the release was mailed to The Mole on Sunday. My own copy reached my Inbox late that day, forwarded to me by a fellow blogger who got it via a third party. Ah, PEMANDU works in mysterious ways, I thought. Or that's what you get when you think engaging bloggers is a waste of time, or in rempit lingo ... "buang karen".

In any case, this para in the press release contains serious factual error:


Recently a Pemandu employee, Farah Intan Burhanudin, who is a senior analyst with the Reducing Crime National Key Results Area (NKRA), came under direct attack from bloggers. Wayward allegations both on a professional and personal level were made on her work performance and her character.

Read my posting about the Hot Stuff ... again. The bloggers did not attack* Farah. They merely published a mail that was sent to our inboxes. I can't speak for the other bloggers but I was hoping that PEMANDU would be prodded to speak up and defend its integrity and track record. Pity they chose to shoot the messengers.