13. From May 13 to PRU13, the unlucky number for some culture is apparently a blessing for the Malays and Bumiputeras. Or at least that's how one may choose to look political events in this country that have been altering the fate of Bumiputeras (in the form of affirmative actions NEP and NDP) and BEEP, or the Bumiputera Economic Empowerment Plan launched by Najib Razak yesterday. Read Pasquale's Defining Moments ...


"The economic empowerment of bumiputra won't cut off, take away or deny any other's rights." - Prime Minister Najib Razak on the new Bumiputera Economic Agenda, Sept 14, 2013


Meritocracy Among Bumiputeras. On the contrary, Najib's pro-Bumi policy will contribute towards the expansion of the Malaysian economy and, as a consequence, the wealth of the other ethnic groups.

Malaysia's track record speaks for itself: four decades of pro-Bumiputera socio-economic programs have benefited not only the Bumiputeras, who used to the poorest in their own country, but also the non-Bumiputeras as well as millions of foreigners who make their money in this country, some illegally. You can say that these policies are also responsible for the peace and stability that we have enjoyed in spite of the ethnic, cultural and religious diversity; after the 1969 racial riots, the Malays and other Bumis have co-existed without incidents with the Chinese, Indians, Sikhs, and other non-Bumiputeras. Despite the NEP and the NDP, the non-Bumiputeras who make up less than 30 per cent of the population, still own more than 70 per cent of the country's wealth. 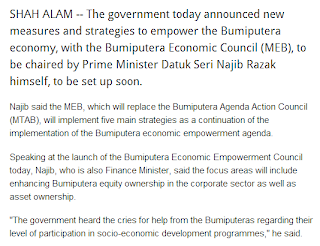 An aspect I like about Najib's Bumiputera agenda is that it sets out to spur competition among Bumiputeras themselves. The PM has asked the planners to specifically ensure that the programs don't become breeding grounds for cronies. "Think of it like a beauty contest," he'd said during a session with stakeholders. For eg, start-up companies eyeing a RM500,000 grant to turn their ideas into commercially-viable project must convince an independent panel made up of successful Bumi entrepreneurs in a rigid selection process where no Minister will have a say.

Another aspect is the commitment Najib's Bumi Agenda expects of Government-Linked Companies. Some GLCs, we all know, have forgotten their station in life. The new Bumi Agenda will ensure that the GLC key performance index takes into serious consideration what the corporation has done to help promote Bumiputera entrepreneurs and human capital. Read h e r e.

To be cont'd. In the meantime, pls also read Najib's full text at UiTM this morning, H E R E.


Updated, 15/9/2013: In Apa Najib Mesti Buat, which he wrote on Friday the 13th, the day before the PM launched the government's Bumiputera Agenda, blogger SatD sets up an interesting, if somewhat distressing, context i.e. Najib Razak's first term as PM wiped out the gains Bumiputeras had made vis-a-vis income gap with non-Bumiputeras for the last ten years. At the very least, that's what the PM needs to restore via the Bumi Agenda. The blogger also calls for a Royal Review of the implementation of Article 153 and the corresponding affirmative actions NEP and NDP. In addition, the Majlis Raja-Raja should ask for an annual performance report on the Bumputera Agenda which should, in the name of transparency, also be made available to the public.