"Does Wan Saiful know what the duck he's suggesting for Article 153?"

Wan Saiful Wan Jan is one hell of a lucky Melayu.

Born in 1975 in Alor Setar, Kedah, he grew up in a police barrack but by the age 18 was already in the UK pursuing his studies, one of thousands of young Melayus who have gotten such opportunities as a result of the push for affirmative actions by the Malaysian government. By the time he came back to Malaysia in 2009, Wan Saiful had spend all his adult years - 16 in total - in the UK! He could have financed his studies and his stay there by himself but he was the son of a policeman, not a king, so it's very likely that he had won some scholarships from the government or a Malaysian GLC at some point.

In the UK, he became a PAS member but was sacked from the party for the un-Islamic act of joining the UK Conservative Party. He even contested in the English local elections in 2007. Now four years later and still only 38, and having co-founded IDEAS with a young prince from Negri Sembilan, Wan Saiful thinks it is time to remove Article 153 of the Constitution, relieve the Yang DiPertuan Agong the responsibilities of safeguarding the special position of the Malays, and deny all Melayus in 10-15 years the privileges that thousands like Wan Saiful himself have enjoyed during the last 40 years or so.

Excerpts of what Wan Saiful said: 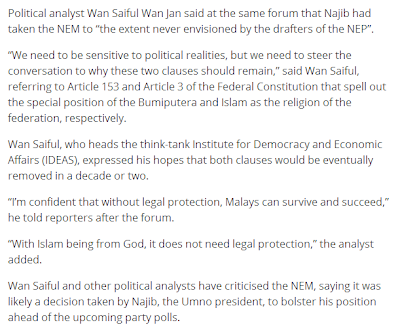 I was not at all surprised by Wan Saiful's attitude. From experience, some of the loudest opponents of pro-Bumiputera policies are people who have benefited immensely from those policies. The anonymous blogger SatD is NOT one of the privileged budak-budak Melayu but I've learned that it's dudes like SatD who usually tend to defend the policies.

As it is, SatD thinks Wan Saiful probably does not understand the enormity of his suggestion to remove Article 153 and hints that the IDEAS CEO was probably just doing the bidding for Anwar Ibrahim's Pakatan Rakyat. What do you think - Is IDEAS running out of ideas?

New comments are not allowed.