No more GSC for me, thank you! 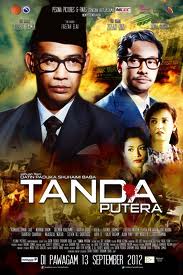 No go for Tanda Putera at Golden Screen Cinemas in Penang

BY K. SUTHAKAR
GEORGE TOWN: Golden Screen Cinemas (GSC) will not be screening the controversial Tanda Putera movie in its two cineplexes on the island and mainland here following a request from the Penang Government.

Queensbay Mall GSC manager Sam Kok Kee said he received a directive from his headquarters yesterday not to screen the movie.

The cineplex in Queensbay Mall has advertised that the movie will be screen six times today, same as GSC cineplex in Sunway Carnival.

Meanwhile, Chief Minister Lim Guan Eng said the state government did not impose a ban on the screening of the movie in the state.

“We only issued an advisory. No action will be taken against cinema operators who continue to screen the movie despite our advice,” he said in a statement on Thursday.

The movie is to be screened nationwide from today.

Whatever their reason(s), they can't put the blame on Lim Guan Eng because the Chief Minister has made it clear that he did not force any of the cinemas in Penang to not show Tanda Putera. Lim Guan Eng even gave his word that "no action will be taken against cinema operators who continue to screen the movie despite our advice". In other words, you won't get shot if you screen Tanda Putera or if you take your family to watch the movie or if the multiracial cast of the movie go to Penang to promote their movie.

Despite Lim Guan Eng's assurances, the GSC has taken it upon itself to not screen Tanda Putera, a movie about the life and death of two of our greatest national leaders - Tun Razak and Tun Ismail.

I will not boycott Lim Guan Eng, I think he is not racist but a man seriously ill and needs help and I will try my utmost to get him that help, but I have watched my last movie at GSC, for sure.