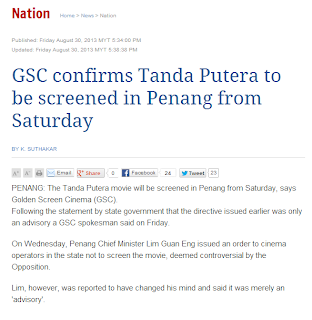 
So, since Guan Eng's "directive" has suddenly become "only an advisory", the people at GSC, the largest cinema chain in the country, have decided OK-ah they'll screen Tanda Putera, the locally-produced movie the DAP hates and fears for reasons only known to the DAP.

Ah, so we should all be so grateful to the GSC lah, eh? God works in mysterious ways, you see, and now we all know how eager you buggers were about the prospects of polishing Guan Eng's shoes ...

I hope the GSC pr people have learnt a lesson or two about their politicians from this episode.

Advisory to Lim Guan Eng, take a break from your extreme politics for one day today, go and take your family to watch Tanda Putera. Thousands of Malaysians have watched the movie and I don't hear of anyone starting a racial riot as you said they would  ...

"... this film ought to be on every citizen's "must watch" list for its historical significance ... it remains a strong contender for the top prize at the next Malaysian Film Festival."