Malaysia, "Where death is cheap and staying alive costly"

Original Article:
A Malaysian visitor to Singapore snapped this pic at a busy interchange: 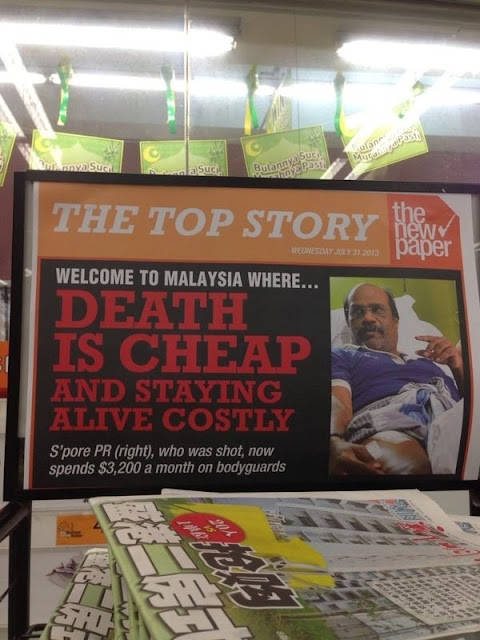 We know the Singaporeans are kiasus but surely there's a line of decency that good neighbors don't cross. You don't, for example, advertise your neighbor as a country where "death is cheap and staying alive costly". For The New Paper to publish a front-page story this way about our country is uncalled for. Perhaps they want to make their own people and potential tourists forget that Singapore is where a cop just brutally murdered a father and his son for a few dollars more [Singapore cop charged over double murder, July 17] but it should not be at our expense or good bilateral ties."

Aiyaaa Dato Rocky...where is that place call Singer Pork??? My grandma of my granda wrote once upon a time...there is one island full of Tongkang Immigrant lai...ill legal came u know..then they claimed that island is theirs...ooyoooo...what kind of creatures were they...hoooo no wonder now they happy to say bad thing of others...they are just BAD people...

They want to demonise Malaysia because the chinese icon lky has failed in building a nation.

The kiasu island leapfrogged thru money strategies and now that their 3 big banks were downgraded to negative with the peception of money laundering ...

the kiasu island is sinking literally and economically

well at least their cops are caught and jailed.

ours are still alive and living wealthy lives so that says a lot about our country.

But then from what it seems, life is indeed cheap and staying alive is indeed costly now. Any difference between me saying it and Singabloodypore saying it?

This is such a true FACT of Malaysia. Other than people in bn in particular umno, the rest of malaysians would whole heartedly agree as bn and umno would only say crime is just a perception!!!!!!!!!!! Malaysia is so screwed as she is run rule by dogs!

wake and and smell the anus

Singapore paper slanting the news with reference to one of its own citizens.

And then you also said earlier, do not believe everything in the news?

No different bocos you are one of them abd we know who...!

Yes BN rules becos of the Malays support. Who doesnt like can cross over tha causeway. That doesnt do sby harm to this belove country

With PM like Najib lembik the tiny red dot does not even care for any kind of decency at all.

Najib has openly shown the world how he bowed down to every demands of a certain race and now actually is looking pretty stupid around the region.

With a PM like Tun Mahathir...Singapore did'nt mess around do they? why? cos' Tun Mahathir commands respect even to Singaporean.

It is a pity UMNO is led by a weak leader. Is there no other leader capable of taking over the top job? if there is none...it is the end for UMNO.

tokong excel error, the failed accountant also said Johor is unsafe but gun deaths is common in penang under his watch

they accuse others but thy are more guilty

ps old fart, your comment is accompanied by stinky stench - that's the difference

Is it possible for our beloved Tun Dr Mahathir to make a come back as the PM? We need him badly right now!

Najib aka Mr Rosmah Mansor, please step down! Go and play with your cats (FYI, I love cats and I keep several of them as pets. Maybe we can exchange cat stories)

The hope and aspiration of the majority of Malaysians who voted for a better Malaysia, are cheated and ruined by those who are corrupted and racist humans now running the Gomen.

We shed tears for our beloved country.

And how many Malaysians are working as auxiliary police officers in Singapore? Go to Changi Airport and take a quick survey!

At least in Singapore, there is a dearth of car jackings, snatch thefts, people being gunned down by hired killers, house breakins....well, you get my drift.

Heck, even our VVIPs swan around in Singapore with minimal protection.

And expatriate parents in Singapore have no qualms about having their kids travel on public transport. In KL......?

I didn't know that Penang has it's own police force....

Silly me.....and here I am thinking that the PDRM's mandate to fight crime covers Penang also.

Stupid is as stupid does.

Oh dear, how can they say these naughty things about bolehland. We never use C4 , we never erased immigration records, nobody died in police custody or MACC custody, nobody got shot. Stop imagining things you bloody singaporeans

I think regardless of where the message comes from, it's a cheap shot statement. However, it's coming from a country that pays SG185,000~ for a Toyota Camry that they get to keep for 5 years. I don't need to explain how crap of a deal that is, so let's move on.

TRUE! Death is indeed cheap. A bullet costs, what, RM1 for your standard 9mm? Compare that to basic security measures, CCTV, Bulletproof vest, Bodyguard, it doesn't take a genius to see that.

A surface level assessment would point to the conclusion that death is cheap, life is expensive IN MALAYSIA. What the editor of the news left out was "-BUT NOT IN SINGAPORE" perhaps?

Ask any of Singapore's Taxi drivers what their biggest problem is, they will all tell you "Rising Cost of Living", their morning coffees went from SG0.75 to SG1.00...However, only a dumb-ass will take their word and assume it's a "Problem in Singapore". It's a problem here in Malaysia too!

Also, to take Singapore's news seriously is ridiculous. How did Singapore respond to the slash and burn haze in Indonesia? Opening it's stupid flap, spilling all sorts of nonsense and trying to act relevant. What did Indonesia do? They gave them the 1-finger salute, and Singapore shut it's mouth. Singapore is a country filled with hypocrites, they burned their whole damn island down to build orchard road! Also, most of the damn companies performing slash and burning on their plantations were OWNED by Singaporeans.

Pls do read OutSyed the Box, it is more credible to the rubbish that you blog, especially his recent article on Singapore.

Where else in the world got police shoot foreigners, witnesses jump from building, police murder detainees. Apalah Rocky, you tak malu ke ?

Few months back my Apek neighbours, when they speak of Singapore their eyes will twinkle like twinkle twinkle little star.

Now not a word, probably too nervous that their savings in the 3 downgraded Singapore Banks may turn from diamonds black stone?

Norman Fernandez,
JB = Jenayah Banyak?
I suggest you go to Angsana this afternoon and then tonite to Pandan City.
See for yourself the Singaporeans coming to get themselves killed at these places.
That if you can get through the traffic queue to park your car la..
wak

Rocky,
Your bubble burst! Your good fren Kadir Jasin disagree all the way ...read MI todaY....in a way he was right on man!

AT LAST! NOW I KNOW WHERE ANWAR, AMBIGA, TIAN CHUA ETC ETC GOT THEIR INSPIRATIONS FROM....

AT LAST! NOW I KNOW WHERE ANWAR, AMBIGA, TIAN CHUA ETTC ETC GOT THEIR INSPIRATIONS FROM.

You obviously do not know how endemic crime is in JB or how dangerous many areas in JB is. Only yesterday, in the car-park of Sultanah Aminah Hospital, a Malaysian with Singapore PR was abducted and bundled into a car, driven off and robbed and thrown out. These are not isolated cases but regular occurance. Remember the story of the escalator (yes escalator) been stolen from Pacific Mall and the police at the policestation just a stone throw away did not even know. I standby with my view that Lee Kuan Yew was right.

Hey Latuk : let's not talk about shootings. Let's just talk of murder cases not by guns. How many have solved ? Remember the poor lady who was knifed to death in Gasing not too long ago ? Police was quick to announce the arrests of 4 suspects. What happened to them ? No announcement of charges, and also no announcement of the release of the suspects. In this country, there is no responsibility and no accountability. Singaporeans be warned.

Iskandar will be a heavily fortified area for Singaporeans. The rest of JB can go to the dogs. And your political masters can howl whatever they want but reality hurts.

Outsyed the box. Really sometimes I thk he is a big time hypo.
Prop you are a pap

Whats so good bout singapore? Ive met alot of them singapork chingkies kissing my feet just to get consultancies works.. but me being a true malaysian would award to malaysian.. just the fact that I think we are better than them eventhough most of the malaysian chingkies consultant are so slow and have the tendency to cheat..

Rocky both TNP and the ST carried the denials today. Even though a senior offical of Singapore's MOFA cautioned TNP the paper itself remain unapologetic and stand by the story. TNP has a history of sensationalizing Malaysian issues and especially JB. They even reported the students in SM Pristina was told to eat at the toilet.

The ST also carried the story and quoted your blog post. But it also carried Kadir Jasin's statement supporting TNP.

ST, while being less sensational, always been subtly publishing negative stories of Malaysia and in the perspective of PR.

ST been giving heavy coverage of the recent crimes some even made to front pages.

The paper said so in Malaysia; but in Singapore vice versa! Care to talk about increasing number of suicides due increasing cost to keep living in Singapore?

I find The New Paper's "we never intended to insult Malaysia" line very condescending as it means to take all of us this side of the Causeway for fools.

Even the great Lee Kuan Yew, after his infamous remarks about crime in JB back then, did not get off scot-free!

Remember the story of the escalator (yes escalator) been stolen from Pacific Mall and the police at the policestation just a stone throw away did not even know. I standby with my view that Lee Kuan Yew was right.
5:14 pm

YOU ARE RIGHT.BUT YOU SHOULD KNOW IT WOULD NOT HAPPEN IF PACIFIC MALL EMPLOYED 'GURGHAS' TO SECURE THEIR PREMISES.

Why so vocal, Bru?

How many people have been shot in Singapore from the beginning of the year till now?

Apart from the sensationalist headline, The New Paper reported facts (which can't be refuted) and quoted Malaysians who were willing to be identified by name.

And what TNP wrote about are the same issues that foreign investors and talent are considering before relocating or investing in Malaysia.

Are you saying that there are no valid concerns about violent crimes in Malaysia?

Have you asked the Iskandar people why security and safety are key topics raised at everyone of their selling missions?

Or is it easier, like Awang Selamat, to blame it all on "jealousy" or unspecified nefarious motives?

And hitting at LKY was a cheap shot. A man whom our own Tun Daim called "one of the greatest statesmen of his time".

It's strange that I didn't read about Awang Selamat criticising Daim for those remarks.

truly Malaysian, stay alive, be alert. you don't need any police to be around if there is no crimes.