Singapore would have whacked them nicely ...

Here in Malaysia we have baskets of apologists for this "takde akal" couple. If they had tried the same stunt in Singapore they would have been whacked nicely, even though Malay-Muslims form the minority of the population, and even thought Singaporeans are supposed to be more liberal, say lawyers in the Republic. Well, the couple tried to be porny with Singapore last year and look what happened: Mr Halal Bakuteh lost his NUS scholarship! Perhaps their apologists here should fight for his reinstatement in the university and, failing which, accuse the Singaporeans for being so square.

The article in the Singapore news: 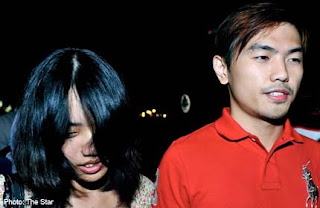 SINGAPORE - Had Malaysian sex blogger Alvin Tan - a former National University of Singapore scholar - and his girlfriend posted a religiously-offensive photograph here, as they did in Malaysia, they would likely have been charged for their actions.

This is because Singapore's sedition laws are not too different from those in Malaysia, said lawyers here whom My Paper spoke to.

Tan, 25, and girlfriend Vivian Lee, 24, were arrested last Thursday by the Malaysian authorities and charged under the Sedition Act, the Penal Code and the Film Censorship Act.

The couple had posted a Ramadan greeting on Facebook that showed them eating pork, which is offensive to Muslims. The couple were also charged over posting of pornographic images online.

They were denied bail and jailed pending trial.

Mr Amolat Singh, managing partner of Amolat & Partners, said that if the couple had posted the offensive photo here, it could be a crime under Singapore's Sedition Act.
Last October, The Straits Times reported that the couple was investigated by the Malaysian authorities for making public their sexual activities.

Mr Bryan Tan, a partner with Pinsent Masons MPillay, said the sex bloggers "would probably have been called in for the Ramadan greeting post" if it was made here, as Singapore has a "very strict view regarding the maintenance of religious harmony".

Still, Mr Daniel Lim, a partner at Joyce A. Tan and Partners, said it is up to the discretion of the Singapore authorities to charge people.

On why the Malaysian authorities charged the couple over the pornographic images only last week, Mr Singh said they might have been prepared to give the duo a chance.

"However, the two continued to push the envelope. They became bolder," he said.

Singapore would have put Ibrahim Ali in jail too.

over here we have nazri and ah jib gor. that's why melayu jgn lebih lebih.

the couple would be safer if they do it in harakah an live either in sepang or kelantan.

"Mr Singh said they might have been prepared to give the duo a chance.

"However, the two continued to push the envelope. They became bolder," he said."

Cina thinks Malays have bottomless patience and I think some of them are looking for the straw that will break the camel's back.

Ibtahim Ali is a former ISA detainee. How you wish we still had that draconian Act, eh Anon 408pm?

The fact remains, monetheless, that IBrahim Ali said It in response to Catholic extremists who wanted to enforce the use the kalimah Allah in Melayu bibles and distribute these bibles in Semenanjung, regardless of whAt the Court decides. If you ask me, both the Catholic extremists and Ibrahim Ali should have been detained.

You know very well those pupils were not asked to eat in the jamban. It's bilik persalinan ie changing room (not maternity room ok).

While I agree jamban is the proper place for Alvin and Vivian, I disagree with any decision to make non-Muslims eat in hiding during the month of Ramadan. They should be free to eat. Of course, it would be polite to excuse oneself for eating in front of a fasting friend but by all means enjoy the cendol, we Malay Muslims are not going to run amok!

Cuna, if you attend a buka puasa do or buffet with your Muslim friends and neighbours, it would be nice to wait for the Azan and break with us lah. Sometimes that's not the case

Singapore would not jail only these two but the malay bloggers who challenged them by provoking calling them Cinababi as well,that's why they sarcastically post bak kut teh for buka puasa.....I respect these two for their action..if they went to jail or being consider insane sent to Tanjung Rambutan(political motivated) I will personally help them .....

Rocky - Singapore would not have tolerated a political parasite like you either...

Minding our Manners: For Bangsat Religionists and the Banquet Rushers

Well, Bru - do you think that the likes of Utusan Malaysia or Perkasa would be tolerated in Singapore?

That's something to think about, isn't it?

Anyway, school canteens (or tuckshops) in Singapore have long had both halal and non-halal food stalls. That hasn't prevented Malay, Chinese and Indian kids from eating together at the same table in these canteens.

You wouldn't find students in Singapore being forced to eat in places other than school canteens.

Perhaps you are selective in your myopia, Bru.

Then you must know the reason why tuckshops in Singapore sec schools can serve pork: there are no Chinese vernacular schools in the republic!

This school canteen and school suraus and school girls have to wear tudungs and boys in songkok and also long trousers for young boys for school and at play, cannot show the "aurat" were all done and enhanced by way of decree and circulars during the time that guy Anwar Ibrahim was in charge of Education also becos he is from ABIM so he wanted to show that he is more Islamic than PAS.
Now the PAS inclined school headmaster is so hype out over Ramadhan that Muslim students cant even see others eating is due to Anwar too

You can't have your pie and eat it at the same time man. You DAPsters want to do a PAP act then you jolly well brave up to substituting your vernacular Chinese schools for integrated national types man. btw you're 30 years behind time. And note this: there are no Malay-managed integrated schools in S'pore anymore. Maybe it's time we got some back?

Bro Bru , ooi suddenly during this Holy Month u come to you sense and being what you should be .... "Neutral"

Having read yourblogs for years and the postings from various quarters, i have made my conclusions:

I hate DAP chinese even more. Not that there are less of them now.

They are scums as far as anti-malay is concerned.

I think this is because their DNA is like that. Greedy and uncoutured. Thanks also to the vernacular schools.

This was Tanah Melayu for God's sake. Go back to your bloody Mainland. Then again, these parasites fled China in tongkangs because they did not like it there. They should have had all sailed to Greenland instead.

Please speak only for yourself, don't ever try to speak for somebody else ?

When Confucius says,“Worry not that no one knows of you; seek to be worth knowing”; the brazen porn-duo Alvivi may apply it to themselves.

But when Confucius says, “Choose a job you love, and you will never have to work a day in your life”; it doesn't apply to you anti-socials, Alvivi.

Please do the same and condemn Ibrahim Ali too... otherwise you are just talking rubbish!

Could you at least have the courtesy to write in proper grammatically-correct English?

Or is that beyond your capabilities?

Tanah Melayu, forsooth (and maybe you need a dictionary to find out what that means).

Anthropologists and historians (at least those who know their stuff) will have a field day rubbishing your pretensions.

But it's excusable, I suppose, that you grasp at whatever small shreds of dignity you can salvage, because, truth be told, you have little else going for you (and those of your ilk).

Nothing sinister. Just the hard, unpalatable and uncontestable facts of life.

You too charleskiwi same to you...

I thought the extreme ones were the Christians, not necessarily the Catholics? Ng Moon Hing made just as many statements as Paul Tan on the matter...

On a related matter, ain't it ironic that the 2 Catholic Archbishops & 3 Bishops in Sarawak remained silent while waiting for a judicial decision when the faithful there would be most affected by a ban? Instead, those who worship in English are taking up cudgels & hoo haa-ing about the issue.

You forgot to mention the SAP schools in Singapore. Deliberately?

Anyway, it's a fact (which you can verify with your relatives in Singapore) that school tuckshops and canteens in Singapore remain open throughout Ramadan. Including the Malay food stalls in many cases.

Back to point, do you think that the likes of Perkasa and Utusan Malaysia would be allowed in Singapore?

Or that freedom of religion is found more extensively in countries with secular governments?

At least, there are no qualms about interfaith movements in Singapore. Unlike, say, Malaysia.

And no hangups about perceived inferiority complexes either.

They should be charged with stupidity nothing more.

"However, the two continued to push the envelope. They became bolder," he said.

This couple should be thrown out from this country. They are bastard