Between PAS and Mat Said ...

Updated: BN takes first by-election after 505 with even bigger majority  If anything, the Kuala Besut results yesterday confirms three things:

1. that PAS has lost its grip on the rural Malay crowd

2. the Pakatan Rakyat alliance is vulnerable without the DAP Chinese support. 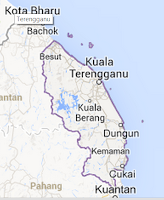 The mom of a friend from Kuala Lumpur is back in Terengganu for today's Kuala Besut by-election. The friend said she isn't sure how mom will be voting this time. "It's a choice between PAS and (Menteri Besar) Mat Said ... I don't envy her," I said. A rock and a hard place, the Devil and the deep blue sea.

At the 13th General Election in May, Kuala Besut elected a BN-Umno man as its rep by a 2,000-plus majority. The turbans from PAS are not likely to be able to overturn that in today's by-election (which was called following Dr A. Rahman's sudden death) but in the event of a Ramadan miracle, the state of Terengganu would see BN and the Opposition having 16 seats each. That would be unprecedented and a big blow to Mat Said, a prospect that quite a few in BN-Umno itself wouldn't really mind. The local joke is, only the Sultan of Terengganu might miss the MB.

But as many observers have observed, a PAS win remains at best a remote possibility despite the party's all-out campaign and Anwar Ibrahim's push. The BN candidate Ku Zaihan Ku Abd Rahman, 37, is a young and energetic local chap who, as PM Najib Razak describes in his message to the Kuala Besut voters yesterday, "is full of ideas to engineer further progress for the people in the constituency".
By the end of the day, we will know if the young engineer's potential is enough for BN to avoid an awkward political impasse in Terengganu. One thing for sure, friend's mom regardless, there will not be a "Chinese tsunami". Some 98 per cent of the voters in Kuala Besut are Malays.