A case for another Felda chairman

Isa Samad, the former Menteri Besar of Negri Sembilan who was found guilty of money politics in Umno, is chairman of both Federal Land Development Authority, or Felda, and the public-listed Felda Global Ventures. His was a political appointment, meaning he was put there by Prime Minister Najib Razak. Felda was formed by an Act of Parliament to help the poor in rural Malaysia and today is made up of over 112,000 settler families, largely Malay-Muslims, in nearly a quarter of the country's total parliamentary constituencies.. FGV, on the other hand, is the world's third-largest plantation company in an increasingly challenging global industry. Isa was made chairman of Felda at a time when Najib was planning to revive a 2003 idea by Mahathir Mohamad, then the PM, to make it a public listed company. FGV was the result of that effort.

I can't boast of no personal interaction with Isa Samad and I can't help notice how controversy and scandal and crisis have dogged the man. Clearly, they have followed him to Felda and now FGV. And clearly, also, at least to me, Isa Samad does not have the knack to nip these issues in the bud. The appointment of Emir Mavani as President and Group CEO, for example, has been an issue on the blogs since May this year. Isa Samad's response only came in today after the mainstream media questioned Emir's credentials and speculated an early departure. 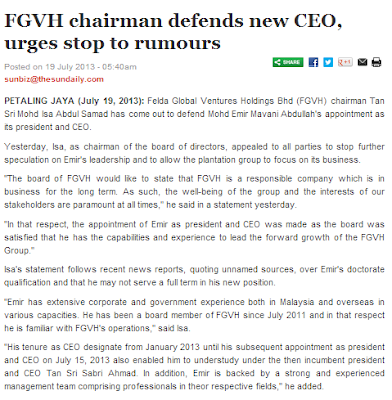 Where was Isa between May and now? Why did he think it was not urgent enough to defend his candidate for the President and Group CEO post in FGV?

My take is, Isa Samad runs FGV like a political party. Or like Felda. The people I have been speaking to said that just won't do. FGV needs its own Chairman who is not a politician or, if he is, does not have the kind of baggage that Isa Samad carries with him. When Isa Samad was telling people to allow Emir Mavani and FGV focus on its business, he should have done more to stop the Emir-bashing in the media - including the new media.

Nothing personal, but if this is how the Chairman of FGV is going to deal with matters, it doesn't augur well for the public listed entity. I therefore agree with the people who have been telling me: FGV deserves its own Chairman. In fact, even Felda may do better with another individual at the helm, if they ask me.

pass it to Azeez baling currently at tabung haji.. najib likes him soo much.

or the financial wizard of the century anuwar ibrahim....NOT

Rocky I am with you one hundred percent and all the way...my take is Isa Samad must go and FGV must have its own chairman....enough said even I can also get fed up! Saya dah bohsan!

Give him a free hand to run FGV.

Most of us know from the Start it was a Fatal Appointment what with Isa Samad's Track Record!

What is happening is symptomatic of Najib'couldn't be bothered way of running the Country.

You Can't Fault him Rocky...After all that's how you got your Datukship.

For new chairman of FELDA, how about another mamak with 2 E, Reezal Merican?

Nobody is asking you and nobody wants to know.

Who are you compared to their experience and expertise?

Paid blggers do not qualify.

There are so many many great towering malays who have the brains and work experience to helm our GLCs but sadly, they wont be given not even one slimmest chance to smell these lucrative posts - instead almost all these posts will be reserved for expired old politicians or botek kakis to the powers who don't know anything about the business nor have the brains to move it forward.THAT'S WHY SO MANY OF US ARE DEAD FED-UP WT GOVT !Datuk,You should lead to correct this type of nonsense.

if this is how najib setting up the team..as a BN voter.. sorry dude.. no vote for u next time..

Ah rocky realised jibby on the way out. Must say rocky, you give parasites a bad name.

A good reason to vote Najib out. In next UMNO assembly if delegates have the guts or next GE to show Malaysians care for the lesser Malays. Instead of listening to only lobbyists Najib or whoever replaces him should put his ear on the ground too.

Don't quite understand why we need to go after Isa.

Yes, he was one of the few that was judged guilty for money politics but we all know almost everyone going for power were doing it then.

It was a question of who gets caught.

If you remember, so did another big UMNO guy. But he continue to head a state government and did a decent job. Some bloggers are full of praise for this guy and now asking the government to give him a post somewhere after he lost the election.

To be frank, there a lot more 'Chairmans' out there (who are not politicians) who regularly abuse their positions on lavish trips and royal-like treatment where ever they are.

And worse still, it's not their company...it's government link companies.

So give Isa a break, we know why he's there. You need to understand how influential he was (and still is) in Negeri Sembilan politics. Maybe because he's Felda chairman now is the reason BN still control Negeri Sembilan.

DRocky...you should really ask the questions about the dodgy CEO appointment to the guy who's REALLY in charge.

Government owned FELDA and FELDA Asset Holding Company owns 40% of FGVH and as majority shareholder, they have the right to appoint Chairman and key executives. Don't like the choices then change government...

Everyone and his uncle Bob knows UMNO found Isa Samad, the former Menteri Besar of Negri Sembilan guilty of money politics. So was Ali Rustam, CN of Melaka, in 2009. Ali also spent over $200K on his son's wedding and illegally, against Govt SOP, accepted the services of Govt departments.

Don't forget that another CM of Melaka with a suspet past is Chairman of RISDA. So, why were they allowed to continue in office by PM Najib? Why was Isa appointed Chairman of Felda in the first place if his integrity was so suspect, UMNO would not allow him to stand for elections?

The answer is this is the policy of a Govt of Thieves headed by the very suspect Grossemajib who wears the panst (and her PM husband)! Thieves of a feather, band together!

Don't vote in a Govt of Thieves, then complain about their crony crooks being given gaji buta and highly paid positions in Govt and GLC's.

Dpp
we are all of 1 Race, the Human Race

Tengku Zafrol was right. He is a bkoody crook and he doesnt deserve to be there.

He and the Dr? Manvir are going to run Felda to the ground and turn the settlers against the government in short time.
many decisions made so far are scandalous....
Whats really sad is that there are well qualified and straight anak Felda management who can run Felda well with the settlers interest at heart...

we wanna honest chairman please...otherwise we lost our vote again...tq...