And remember this: once they take the oath, they are deemed to have accepted the results of the 13th General Election. - Pakatan MPs want to boycott Parliament, izzit? Rocky's Bru, June 7


Were you surprised when you heard the news that Anwar Ibrahim will attend the swearing-in at Dewan Rakyat this Monday? 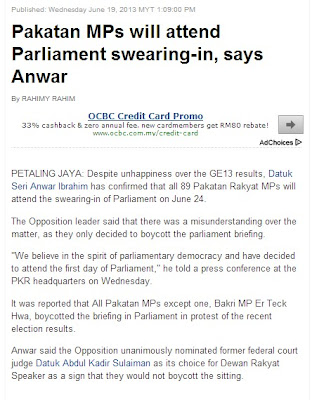 I didn't think you were.

Anwar blamed a "misunderstanding" for the talk about the boycott. He sure took a long time to set the record straight. In typical style, he tries to create a new issue (the selection of Parliament Speaker) to distract us from the fact that the minute he's sworn in as an MP this Monday, he would have, officially and in front of the Agong, accepted the results of the PRU13.

And he would have broken his promise to you that he'd retire from politics if he didn't unseat Najib Razak as PM in the May 5 general election.
at June 19, 2013

Dear brother Bru, I'm a nascent blogger who seek for blogging guidance, do add my blog in your bloglist ya bro. TQ

So typical of this bloody liar!

Anwar is a loser. If he boycott parliament he would be condemned and now he decided to attend 'he chickened out'.

I think Anwar NEVER said they will boycott the swearing ceremony but the briefing which is not compulsory. This is just another low grade spinning by Rock

A typical pariah Atok Gay terkutok named Nuar Jubor, once a pariah motherfu#@$* kurap always an asshole. Typical of Nuar Jubor, I think most rakyat are not surprised. He is an asshole. Only Nurul think papa ku Hebat. But of course Wan Jijik knows the truth. Keluarga 69 lah katakan.

so now we now that he is a fucking gay liar anti-god.

wow. and he is supposed to be the PM. no wonder cinabeng like him.

Does make you wonder who his "supporters" really are, doesn't it?

The only logical explanation is that Aljuburi "supporters" have their brains firmly shoved up their asses!

Nothing, zip, nada, no news, no comments, no stories, about Anwar surprises me anymore. You can tell me he spawned or is spawned by hitler, I'll believe you. You tell me he is HIV positive I'll believe me. You tell me he's made a pact with the devil and is now an immortal, I believe you. Having said that, I would also like to state the man is now totally IRRELEVANT in this nation's political landscape. In fact, he is

Hahaha knew it.No surprise at all. Kena telan ludah sendiri. How many times must eat his words.
Wish he alone boycotted. Then he will automatically lose his seat in 6 months.
Of course, he won't dare because it means not respecting Permatang Pauh voters who wanted him to be in Parliament.
Of course, he's not bothered about derhaka kepada DYMM YDP Agong.
Now modal baru - perlantikan Speaker and Throw out EC Bosses.
Ehhmm, why can't his stupid supporters see his ploys. I never trusted him from day one.
Infact if it's said he died, I will go to the house and check whether his body is there before I believed it.

But these pr supporters are the dumbest. They are always conned by Anwar to do things for Anwar. They somehow employ the mindset of kindergarten children when commenting on politics. They were easily fool by non sensical improbable fraud allegation of Anwar. They apply laws selectively favouring themselves. Always asking for higher burden of proof when any allegation is made against them but when they accuse others they can allege nonsense and asked counterparty to disprove pula. For example the blackout allegation. How can this be fraud, when their pr agents were there to object any counting irregularities and at the end sign off the voting tally indicating he's accepted the result. Really stupid allegation which cannot stand in any courts in the world. What stupid nonsense to say this tantamounts to fraud. They believe hook and sinker what Anwar says. Really stupid. See http://hakbersuara.wordpress.com/2013/05/25/kenapa-rakyat-suka-diperbodohkan/

I don't want to insult DSIA with 'dirty' words...we should respect him too.but doesn't mean we agree what he done!He should accept lost in GE13.Whatever facts or numbers,he should accept the result,,,so many ways he trying to 'tarnish' SPR,the last action,meet SBY in Bali...I don't it's right way DSAI...everyone can lie...

well buttman loves "chicken" so you are what you eat

dap needs another Malay Muslim face to con the majority