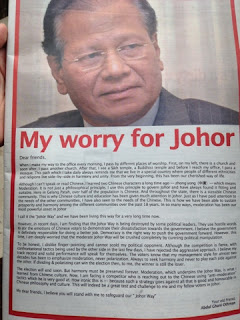 After 18 years as the Menteri Besar of Johor, Ghani Othman is fighting his biggest political test, not so much against Lim Kit Siang, who's been labelled by no less than the statesman Mahathir Mohamad as a racist, but against the attempt to deconstruct "the Johor Way".

Today, in a newspaper advertisement, Ghani sends a powerful message in his usual mild manner.

"They use hostile words to stir the emotions of Chinese voters to demonstrate their dissatisfaction towards the government ... I am deeply worried that the moderate Johor Way will be crushed completely by cunning political manipulation.

"The election will end soon. But harmony must be preserved forever. Moderation, which underpins the Johor Way, is what I learned from Chinese culture. Now I am facing a competitor who is reaching out to the Chinese using "anti-moderation" tactics which he is very good at. How ironic this is -because such strategy goes against all that is good and honourable in Chinese philosophy and culture."

The Chinese voters make up 54% of Gelang Patah parliamentary constituency, which sees Ghani taking on marauding DAP strongman Lim Kit Siang.
at May 03, 2013