Najib at DJZ's: How sincere is the PM towards the Chinese community? 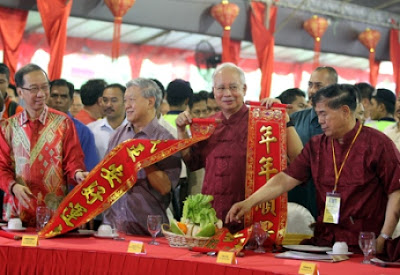 "... It’s difficult to imagine how the Chinese community could fair any better under a hypothetical alternative Malay ethno-nationalist regime, or an Islamist regime."

I feel inclined today to assure my fellow Malaysians that not all foreigners are like Nick Xenaphon. There are many who have worked and lived in this beautiful country and who will tell us how lucky we are to belong here. These foreigners don't have any hidden agenda and they won't benefit from a "spring" in Malaysia. And sometimes they see things more affecting us clearly than we do. Take Nile Bowie, the Russian Today correspondent in KL, for example. While Najib Razak's presence at the Dong Jiao Zong's CNY open house was politicized by the pro-Pakatan social media - with many questioning his sincerity towards the Chinese community - this outsider seems to have no doubts whatsoever:

"Under Najib’s administration, Malaysia’s relationship with China has expanded tenfold and cooperation has never been better ... China has been Malaysia's largest trade partner, with trade figures reaching US$90 billion in 2011; Malaysia is China’s largest trading partner among ASEAN nations."

"... under the ruling party, the Chinese community have been able to practice their culture and religion without hindrance, and pursue their business interests with minimum intervention from the state. Despite the discontent voiced by social media users, it’s difficult to imagine how the Chinese community could fair any better under a hypothetical alternative Malay ethno-nationalist regime, or an Islamist regime."


Najib's commitment to improving Chinese education in a Malay-majority Malaysia (or was his visit to DJZ's open house a ploy to fish for Chinese votes?):

"The children of both Prime Minister Najib Razak and Foreign Minister Anifah Aman are Mandarin-educated, reflecting the importance that Malaysia has placed on Chinese-education and toward China as an emerging world power."