Officially, the biggest lie or/and dumbest political stunt of 2013. Thanks to Nizar, Malaysians witness first hand how gullible some Pakatan politicians and their rabid supporters in the likes of Malaysian Chronicles (RM207 billion hijacked by Dr M) and Malaysiakini (How could RM207 billion Death Railway fund vanish?) are. 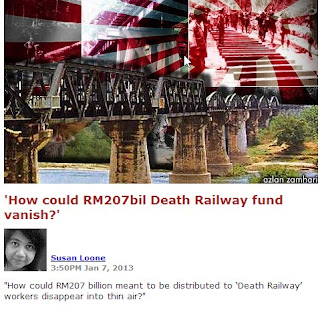 And how their Ketua Umum perpetuated the lie/dumbness (Explain RM207 billion compensation: Anwar). 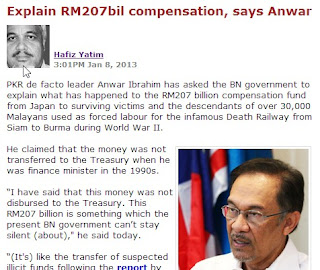 Unfortunately for them, the Japanese Government has issued a formal statement denying Nizar's claim that Tokyo had paid the RM207 billion to Malaysia.

So, really, can we trust the likes of Nizar and these portal with anything?

PETALING JAYA: Japan never paid RM207bil to the Malaysian Government as compensation for victims of the Death Railway project in the 1940s, according to the Japanese Embassy.
Its Second Secretary Takaharu Suegami, responding to PAS working committee member Datuk Seri Nizar Jamaluddin who was reported to have said so, said the latter's claim was “outside the involvement and knowledge of the Government of Japan”.
“All questions arising out of the unhappy events with regard to Malaysia have been fully and finally settled under the San Francisco Treaty which entered into force in 1952,” he said in a statement yesterday. Nizar was quoted by Harakah Daily as saying that the embassy had confirmed that the money was handed to the Malaysian Government in 2004.
The report stated that the money had yet to be distributed to families of the estimated 30,000 Malaysians who were forced labourers of the project between 1942 and 1946.
Suegami said both countries had also signed an agreement on Sept 21, 1967, whereby Japan agreed to supply services and products to Malaysia totalling RM25mil.
The grants, he said, had been used to build two ships, among other projects, but there was no transfer of an undisclosed amount of money.
“Malaysia agreed that any question from the events of the Second World War that might affect our good bilateral relations would be fully and finally settled with the agreement.
“All the supply in accordance with the agreement was completed by May 6, 1972,” he said.
at January 09, 2013