Chief Economist to sue bloggers, etc who slander him 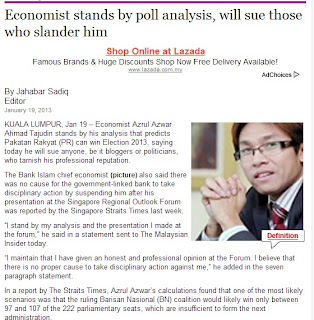 With updates (Jan 20)
In my Friday, Jan 18 posting The Untold Story of Wawa the Chief Economist of Bank Islam, I predicted that "the next 24 hours should be hot". Well, I did not expect Azrul Azwar Ahmad Tajuddin,suspended form work by his employer, to react in such a manner as to threaten to sue "bloggers, politicians and others" and lament the "state of Malaysian democracy". Must have been hot under the collar!

Read Jahabar Saddiq's report h e r e. Tell me if he doesn't sound like some I-will-sue politicians we know.

Still, Wawa has the right to seek redress if he thought he'd been maligned. This is a great democracy where you can instill a million doubts in the judiciary and link it to the ruling Government, and then file a multi-million ringgit lawsuit at the first opportunity you get. How many times have we witnessed that?

But like I wrote earlier, this ain't about some petty PRU13 predictions. My blog readers make all kinds of predictions all the time about the General Elections in my comment box (but they do it in their personal and usually anonymous capacities). This is about  the integrity of Bank Islam and the secrecy of our banking and financial industry.

I predict the next few days to be even hotter ...