DAP and its Melayus: How they both blew it!

A RACE LOST. Nearly nobody had anything good to say about the 8 Malays who lost in the race to be elected leaders of DAP, a predominantly, traditionally and spiritually Chinese-based party.  I don't have any good word for any of the 8, either.  Of course, I don't like to think that they lost because they are Melayus but because they are not good enough as well. In other words, if they were to contest in Malay-based parties such as Umno, PAS, PKR or even KITA, I don't think they would do any better.

Could the Lims and the other DAP leaders done more to get the members of the party to vote for a Malay or two for the 2013-15 line-up? They could have. And they should have. After all the hype about not being racist or race-based, the DAP failed to take the chance to prove that they really are multiracial and multi religious. The Malays in DAP have lost face and lost yet another battle to turn the party into a movement where they could compete based on merits. But to me the DAP is the bigger loser: it lost a big opportunity to walk that big talk ...

I don't think there will be another one. 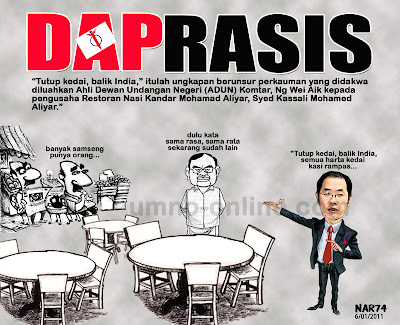