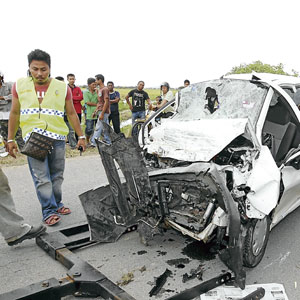 Five in a family perished in a head-on collision involving a lorry yesterday.  [watch the NTV7 clipping h e r e ]. The driver of the lorry was believed to have lost control of his vehicle. The accident happened in Pokok Sena.

Just hours before the accident, the MP for Pokok Sena, blood not yet in his hands then, was urging Malaysians to ignore summons issued under the AES, a new high-tech system that catches traffic offenders on camera.

MP Mahfuz Omar means, if you were caught on one of these cameras going twice or three times the speed limit, in which case you would probably lose control of your vehicle, just ignore the summons. Mahfuz said he will even provide you with legal aid if they charge you in court. 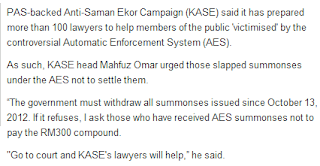 What will Mahfuz tell the family of the five who perished yesterday?