The gloves are off. When Malaysia's pro-Opposition news portal Malaysiakini publishes a six-year old letter from Dr Mahathir Mohamad to George Soros to save itself, it  provoked a flamboyant response from Shamsul Akmar. In An Unlikely Savior for Malaysiakini, the pony-tailed editor of the mole.my chides the "rabidly pro-Opposition" portal for spinning Dr M's letter out of the real context:

"Having vilified Dr Mahathir throughout almost its entire existence, Malaysiakini is using a letter written by Dr Mahathir to billionaire financier George Soros, to indirectly justify its acceptance of the latter’s funding." 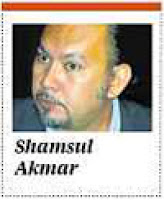 There's no altruism in Soros' funding, Shamsul tells the Bar Council and its "under a rock" president, Ambiga and her pro-freedom of expression NGOs who have threatened to sue the New Straits Times to stifle the paper's own freedom, and Malaysiakini. It's a reverse gang-bang! Brutal.

"... the Malaysian NGOs and Malaysiakini are either naïve or that they take others to be naïve when they insisted there is nothing wrong or sinister about them receiving funds from Soros, his OSI or other organisations linked to them.

Surely, what Soros and the OSI have done elsewhere is not going to stop when it comes to Malaysia. Surely too, Soros and the OSI will aim to use the Malaysian NGOs, which they fund, to pursue their regime change agenda."

Surely, Premesh and Steven Gan, the founders of Malaysiakini, are not expected to remain quiet in the face of  such assault against itself and Soros himself! Especially since the article published by the mole.my has been re-published prominently by the besieged NST as Is Malaysiakini in Mischief Mode?
at October 05, 2012