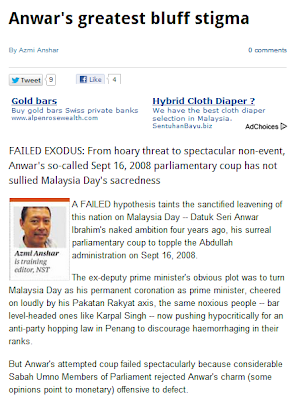 To all Malaysians wherever you are, it's 16/9, Selamat Hari Malaysia!!!

It's 16/9 and Anwar has done it again, too! Four years ago, as Azmi Anshar recalled for all of us, the de facto Opposition leader announced that he had gotten enough number of MPs from BN to jump over to Pakatan Rakyat that would enable him to move into Seri Perdana on 16.9.2008. Many of those BN leaders were supposed to be from Sabah (see Anwar's Greatest Bluff Stigma).

Really, what does Anwar take Sabahans for?

And who was it again who was so against Dr Mahathir's so-called mega projects?
at September 16, 2012