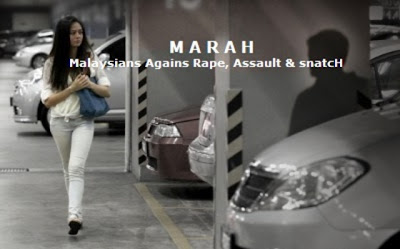 "We are strictly a non-political non-religious color blind citizen’s initiative who care enough to lobby for the safety of all Malaysians in general and females in particular. We are campaigning for safer car parks, safer streets, and the right to be safe in and outside our own homes."

Hats off to blogger Dave Avran [Spanking the Monkey/his Facebook] for initiating MARAH: Malaysians Against Rape, Assault and Snatch. Marah is Malay for "anger". Dave's MARAH has drawn a huge following with over 500 people having signed the petition. And it's only one week since it was set up and Dave hasn't even got any kind of promo on tv or radio or the newspapers, so that's quite fantastic, I'd say.

When I met Dave at Rusdi Mustapha's book launch (Malaysian Graffiti) in Bangsar yesterday, he was angry. Not at the police (like some people) but at the criminals, the crooks. Dave told me he wants to help the police and he hopes that MARAH will be of some use to inspire society to help the cops fight crime.

Does he think crime rate is down? Yes, but Dave says all of us must do more to make sure goes further down ...