Serving the people. The other day, I went into the Malaysiakini CEO's twitter to give my unsolicited two sen's worth about why the disputing MPs of Pakatan Rakyat should just focus on serving the people instead of worrying about winning the (general) election. I am a believer that if an elected rep works hard for the Rakyat, he or she will most likely be re-elected ... 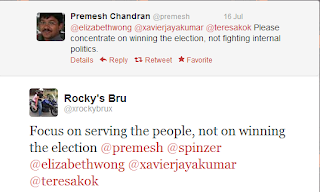 But it is so easy to get carried away once politics has consumed you ,,,

... which brings me to the title of this posting: Is Nurul Izzah working for Amcorp now?


After reading Big Dog's posting Someone should tell Nurul Izzah Ramadan is the month of repentance, I went onto Twitter and asked of the Lembah Pantai MP's real interest in the air traffic system deal. "Is Amcop using her or is she using Amcop?"


From a layman's point of view, I don't see how or why the contest (or dispute?) between two corporations (Amcop vs AAT?) should concern YB Nurul, especially since "the Malaysian ATC system has shown no ‘air misses’ the past 17 years". Is she kicking a fuss because the son of her daddy's rival works and holds shares in AAT (the company that won the deal) or does she have an interest - direct or indirect - in Amcop? Either way, it is interesting to note that AAT's bid for the project is considerably lower than Amcop's!


As a journalist, it amuses me that while its report Winner of KLIA air traffic system bid not up to standards heavily quotes Nurul Izzah on Amcop and AAT, Premesh's Malaysiakini carries a Editor's note at the end of the article to say that "Malaysiakini has contacted AAT for comment on the latest allegation and is waiting for a response".

Who are the people behind Amcop? Shouldn't Malaysiakini be equally interested in Amcop's response, too?

p.s. Big Dog seems to think that there is a connection between a consultant of the deal from Aecom with Amcop, the Department of Civil Aviation. Read his posting again h e r e.