Updated:
How Anwar plays it: Anwar Ibrahim, of course - and you can't blame him, really, did not waste the chance to play the opposite sides (Yusof vs former boss AG Gani Patail), as the excerpts from this report quoted by Din Merican shows:

Anwar welcomed Yusof’s participation in the defence team, disclosing that he had checked whether he was available and then contacted him.

“As you can see, (Yusof played) a role in the preliminary stage with Karpal, and is not here to make up the numbers.
“Yusof’s participation shows that he does not condone this … politically-motivated charge.
“There are many who are in the AG’s Chambers who hold the same view and are waiting for the right time to be with me.”
His willingness to join the defence team “is a clear perception that not all in the government condone” such action.
Anwar added that some have been of the view that Yusof should have been appointed the AG.

Playing both sides now. Those born to hate the PDRM and the Attorney-General Chamber, or for that matter the Establishment and its institutions, tend to align them with Umno. Examples abound. My old friend Commander (Rtd) S. Thaya, who used to serve a pro-government NGO before becoming a columnist with a pro-Anwar portal, is so bold as to label our Royal Police as "The armed division of UMNO" (May 2, 12), a sentiment echoed by Suara Keadilan on May 9 in A Shitty Affair! PDRM: The Empire Strickes Back - The Armed Division of Umno.

When it suits them, they will label not just the police and the AG but also the judiciary, the media, the forensics and everybody else that did not agree with them (and that they did not agree with) as conspirators against the truth, justice, Anwar Ibrahim, etc. Example, this piece here by some lawyers who were so sure that Anwar would be convicted for sodomy. How wrong they turned out to be -  Anwar Ibrahim was acquitted!

And you can't blame people if they suspect, rightly or wrongly, that the acquittal may have something to do with former Solicitor-General ll Yusof Zainal Abidin, who was the lead prosecutor against Anwar in the Sodomy 2 case and who earlier today re-emerged from early retirement as the defender of Anwar, who has been charged for his involvement in the Bersih 3.0 riots.

(Asked about his involvement in Anwar's case ...) Yusof said: "He called me last night, I was willing and able."

He also said that "he was not joining any political party" and that he was an "advocate and solicitor and a free agent".

He said that he took optional retirement in February and had his own law firm and was the only employee in the firm.

Karpal, when asked how he felt about having Yusof onboard said: "This is his first case as a defence counsel. Let's see how he goes, we are there to guide him and anyway he is a very experienced prosecutor".

Karpal also said that when he heard on Monday night that Yusof would be joining the team, he was taken aback.

"Quite incongruous, difficult to reconcile, nevertheless he has opted to be on our side." 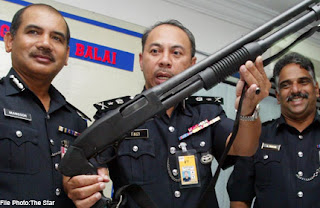 Well, still think the PDRM is an extension of UMNO?

Meet Fauzi Shaari, the former Federal CID director who has just joined PAS, admitted that he was a closet fan of the so-called Islamic party since his teens. Read Former CID Director Fauzi joins PAS. He is even advocating the hudud laws for all in Malaysia but "we are living in a multiracial country. We need to make the people understand about Islam and hudud before implementing it".

Was Fauzi Shaari the only PAS supporter happily drawing good salaries and perks from the PDRM/government, never mind if the PAS ulamas would surely rule it as duit haram? Not likely, right?

That's why I say Yusof and Fauzi could be doing not just UMNO but also the AGC and the PDRM a favour. They are living proofs that these institutions are not aligned to a single political party or ideology.  Only people like Commander Thaya and Malaysiakini and their political masters want us to believe that that is the case, because it would be to their advantage if people are gullible enough to believe so.
at May 22, 2012