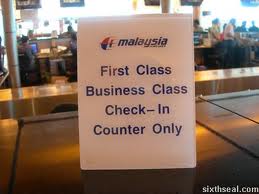 A Syndicate Within. Malaysia Airlines has uncovered a ring involving some senior executive who have been enriching themselves by upgrading thousands of Economic Class passengers to Business Class every year, denying the financially-strapped national carrier of much-needed revenue.

Last year alone this syndicate let go over 50,000 upgrades without getting prior approval from those authorized to do so. I am not sure how they made money from "selling" these upgrades or if they were in cahoots with travel and tour agents, but by end last year the malpractice had cost the national carrier more than RM200 million in lost income!

These unauthorized upgrades are not the same as the so-called "discretionary" upgrades like the one MAS Deputy CEO Rashdan aka Danny's maid supposedly enjoyed on a flight from MH122 from Sydney to Kuala Lumpur on Jan 1 2012, an accusation Danny has denied vehemently but which the whistle-blowing Member of Parliament, YB Wee Choo Keong plans to bring up again in Parliament next month [read his Questions for June Parliament].

After the share swap deal with Air Asia was rescinded, all eyes have been trained on Malaysia Airlines' new CEO Ahmad Jauhari whose task is to turn check the carrier's decade-long decline. There have been interesting developments. A couple of days ago, for example, it was reported that the management was negotiating with MAS Catering to review a one-sided 25-year contract with a company that belongs to the brother of the airline's advisor, (former PM) Abdullah Ahmad Badawi.

If AJ can get the caterers to agree to his terms, the airline might be able to make savings of as much as 15 per cent of the existing total F&B bills.AJ has said that his turnaround plans hinge greatly on making the best out of available resources and stopping the leakages.

I say, Happy Fishing! I hope AJ  goes for the big fish and not just the little ones ....