Pitting a BN elder against another

When I read this piece on the Malaysian Insider yesterday, I wasn't surprised. The general election is near. Pitting a BN elder against another would be a good way to undermine the enemy. It's an old tactic: the Americans do it in Iraq, pitting the Sunnis and Shiites against one another. 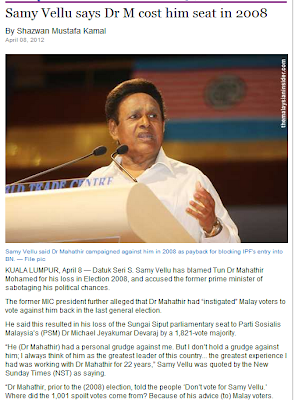 I read on and, well, looks like I owe my friends at The Malaysian Insider half an apology: It wasn't their original article.  (Can't blame the pro-Pakatan portals for lapping up the story, see Mkini and MToday. It  has gone viral on blogosphere, too).

Eight years after Dr Mahathir Mohamad voluntarily stepped down as our PM, the country's media still entertain people who take potshots at him. It is something I find hard to understand. Why can't they let Dr M retire in peace?

When Abdullah Ahmad Badawi was PM, his media barons demonized Dr Mahathir. But that's because there was bad blood between the two. That's past. Those barons have even apologized to Dr M.

Dr Mahathir may be critical sometimes of Najib Razak but there is no bad blood between them and Dr M has never openly attacked Najib. In fact, he has defended Najib's policies when they come under attack.

Samy Vellu must realize that he lost because he was no longer popular. Blaming Dr M for his 2008 defeat is lame. He was powerless then. Abdullah was the powerful one and Samy Vellu had Abdullah's trust and support. At the time, Dr Mahathir did not even have a blog. The newspaper quoted Samy Vellu as saying that Dr Mahathir had incited Malays in Sungei Siput not to vote him in the 2008 GE. Think, guys! The Tun could not even win the UMNO G7 election at Kubang Pasu level in September 2006, so what influence did he have over Sg Siput voters?
at April 09, 2012