Did we even remember Nurin?

Nurul Nadirah Abdullah or Dirang, like Nurin Jazlin Jazimin, was murdered. Nurin was eight when they found her body. Dirang, for heaven's sake, was only five when her charred remains came back yesterday. If not for DNA, nobody would have known what had happened to her after she did not return to her home on March 1. Perhaps that would have been kinder. 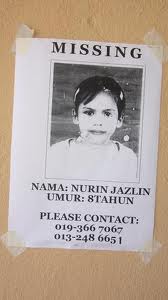 Sometime in August or September 2007, after Nurin disappeared, a small group of us bloggers resolved to take matters into our own hands. We worked with Nurin's uncle and came up with a mechanism based on the hugely successful Amber Alert. We named it the Nurin (Nationalwide Urgent Response Information Network) Alert. We pushed the idea to the Press and then to Shahrizat Jalil but she lost the 2008 election and Ng Yen Yen, who replaced her as the Women, Family and Community Development Minister, had better things to pursue.. When Shahrizat returned to the ministry, we got her to revisit the idea. In Jan last year, she launched the Nur Alert. We pleaded with her to stick with the name Nurin Alert because we needed that name to be kept alive at all times, to be remembered by everyone, and to serve as a reminder to the society that had failed her, no matter how grim.

But because of this consideration and that sensitivity, Nur Alert it became. Still, as Nuraina A. Samad, one of the people behind the Nurin Alert idea, writes h e r e:


"No matter, what's important is that an alert system and mechanism is now in place to save the lives of missing or abducted children."

Several missing children later and after what happened to Dirang, can we really say we have set up an effective alert system? The answer is, we have not. Sure, not even Amber Alert is perfect, but do we - the parents, the police, the media, members of the society - know exactly what each and every one of us are supposed to do when a child goes missing in order that we do the most to save that child's life?

I don't think we do.

And now we seem to have gone full circle. Shahrizat, buried under tonnes of her own domestic problems, has been forced to quit the government next month. Will the new minister care a hoot more?