The Unspinners say the hiring of "friendly" thugs is a cheap political stunt used before in the Bagan Pinang by-election. The cops are checking out this angle, I'm sure. 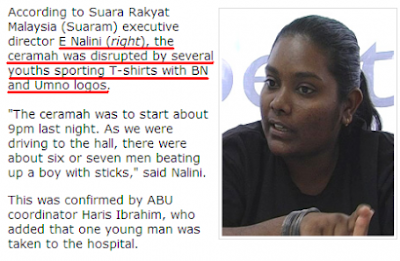 Today's question popped up in my head after reading Helen Ang's Samseng serang ABU, seorang cedera dibelasah. As I read her story, several questions popped up.

Did the organizers of ABU hire those gangsters to make something out of nothing? I'm sorry I have to repeat the question here; as I see it, ABU definitely needs the kind of publicity that such drama could generate and, also, there are a lot of idle samsengs these days. The anak2 ABU won't be happy but I assure them I'm not the only one with this theory.

Of course, in all fairness, I also considered that the report Helen Ang quoted was true, that there was his group of Malays who were not happy and they decided to show their unhappiness that night. After all, even Anas Zubedy had warned the anak2 ABU that an "unthinking" iniative like ABU would lead to bad consequences. Will there be worse ones ahead?

Then I read the bit about an Indian witness' account of these Malay samsengs beating up an Indian boy. You know what's the best thing about it: the samsengs were wearing t-shirts bearing "BN and Umno logos". Haha. Imagine a picture of masked bank robbers wearing t-shirts printed with their Facebook profile pics! LOL!  I mean, if you want to insult the intelligence of the 3.3 million Umno members and 7 million BN cronies, you'd have to do better than that lah.

Now, that's when the NGO bit struck me ... The witness quoted in the story, she is E. Nalini, the Executive Director of Suaram, a Malaysian NGO. Now, what was an NGO representative doing at a political forum? Is Suaram part of ABU? Is Suaram now openly against Umno?
As I understand it, NGOs are above partisan politics,.Suaram cannot, for example, be openly cooperating with PAS, a political party, to try and kill the party's opponent, in this case Umno. Seriously, man, that is so wrong.