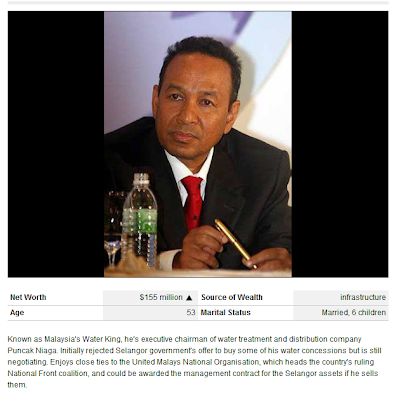 ONE of the factors Pakatan Rakyat hopes will help it in trying to retain Selangor at the next general election is the water issue in the state. In fact, it was one of the reasons why it won in Selangor in the last general election of March 2008. That's why one of the first things that Khalid Ibrahim did as Menteri Besar after PRU12 was to adjust the water rates, which was an election promise and go after Syabas, the company that has been making tons from the privatization of water.

The dude who owns Syabas is Puncak Niaga boss Rozali Ismail and you should know him as he has a high-rise building in Shah Alam named after himself.

Now, after years of benefitting from the state's biggest privatization program, the Tan Sri is throwing his support behind the faction in Felda that is going against the proposed listing aimed at elevating the status of settlers and their families.

Whatever Rozali wants out of this, I doubt it's good.

rozali is a class act.he is a guy who knows the systems in umno.he will bang balls of isa samad.he will.

rozali is a class act.he is a guy who knows the systems in umno.he will bang balls of isa samad.he will.

Rozali aside, anything that involves Isa Samad is bad news...it will usually be tainted with bribery and corruption.

Could it because he is not one of the beneficiaries of the listing?

Are you as confused as I am?

One thing I can see - is that every bugger is shifting alliegences depending on where they can make a quick buck!

As for the listing - I am still not sure if it really is about helping the Felda settlers - because the folks who will really make the big bucks are CIMB and certain individuals who will get the bulk of the pink forms with very large blocks.
As I see it they want to move the profitbale part of Felda into the loss making part - list it, take the plum bits and then cash out.

Why Najib put the GM of Felda on gardening leave is both outrageous and unjust.....

He is the head of BAPAK, formed primarily to counter ANAK.

ANAK is strongly against the listing, and now with BAPAK joining in, it would appear that Felda being the fixed deposit for UMNO will be depleted.

Najib should seriously look back to the 1999 GE when he almost lost.

Now that the Pakatan Govt in Selangor is nailing his ass in Syabas he's not making the millions he used to make. So now he's looking for a new business to take over and make his millions off.
Obviously he sees Felda as his new vehicle. I'm sure he will change his tune if Isa offers him the CEO post on listing.

Ahhhh,,,,its rare indeed to hear from Datuk these days to comment like this! Perhaps Rozali is 'no mans' land kot! Tak bertuan! Hehehe....we will battle on, for the country and the people! In the meantime, Lets call a spade a spade!

Rozali Isamail is a saint when it comes to money.
Please do not ridicule him.
He was there with Mat Thyson when Mat TYson retired Abu Sujak.

Mat Tyson and family together with GLOMAC, WORLDWIDE took almost all the remaining PKNS landbank to themselves.
Prior to that all the land in selangor got into MK Holdings , TALAM, MAXISEGAR etc.

Hi Latok, at the rate and urgency you are spinning it looks like GE is round the conner.

I guess BN is a gone case this time, even GOD won't help BN. The most corrupted government in South East Asia since now Mynmar has decided they are moving away from corruption.

Rozali is obviously off his rocker and becoming too big for his britches. He is hiding behind this new pressure group so he can extract contracts from Felda well before it gets listed. This is an old trick of crony capitalists, though Rozali takes the cake -- after all, who is he to say yes or no to Felda's listing -- why does the government need his permission to list Felda. Also, how looney can this businessman get, to say he will examine the terms of Felda's listing before he blesses the deal. When you think that this man got Syabas, the country's most lucrative water concession, on a platter, he really is power hungry enough to throw the dice at Felda, hoping he will become it's chairman (that is why he is stirring the pot for Isa Samad to be sacked as Felda chairman) and if this does not work out, he has already got in his hand the hapless and clueless Samshuddin, the head of Felda settlers, to join him in creating a pressure group to bait for contracts. This Rozali and Sam are real shams -- anything to promote their self interest.

In my opinion, both are "crooks" . Period!

at least he has the balls Rocky...u were paid to destroy people...what job is that???

Najib is seen as weak by all and Sundry...

Umno and Component Party Leaders know of this and are smartly exploiting it to the fullest...

It started with Abdullah Badawi... When asked to leave, not only did he get a Tun for sleeping on the Job but his new Wife as well...Plus other immense benefits thrown in..

Look at Koh Tsu Koon...He can stay on as long as he likes for Najib will never touch him..

Shahrizat? She is now playing ball with him...Want her to leave?
She will only do so when she gets what she wants...Perhaps immunity for her family and other additional benefits.

Rozali? he knows well that he can do what he wants.

What is so great about the listing of Felda? Sure it is a cash cow and its beneficiaries are substantially Settlers who now are reaping the harvest. So let them if there is no urgency to capitalise and realise!!

Dato', don't simply attack on people. Tan Sri Rozali is my boss. I can assure that his mean is good.Get know him closely Dato'. I aggree with anak Felda Kedah. Salam

In one corner - an ex MB who was found guilty of corruption by his own party no less. Yet he has been made Chairman of Felda.
In the other corner a man who was given a monopoly concession and milked Selangor dry in cahoots with UMNO.
Looks like a battle of the Crooks and Cronies with the crumbs left to the settlers...

I find this comment at A Brick in The Wall as very pertinent:
Anonymous said...

The reality actualy ia that the peneroka will not benefit from this listing. The listed entity will take away about 1 billion in Felda profits and gain a one of payment to Felda of about 6 billion. The profit taken away will impact social and economic programs for the Felda settlers and if you do simple maths, the listing money will only last 6 years. Then where will Felda get money to pay dor these programs? The harsh reality is that the peneroka land is not as proftable and when you take the "cash cow" land out of Felda that doea not belong to the peneroka but from Felda proper and transfer to FGVH, you have a serious long term hole you need to cover. This is the actual truth and thats why the DG wants a thorough a study to be done first. He is a true Felda man and is a good man. The second generation Felda folk do not understand this and only see the short term again. The opposition is saying to the peneroka not to support listing as they will GIVE the land to them. This complicates things as other people now think that the DG supports the opposition. This is sooo not true. He is a loyal civil servant and the reasoning behind his questioning is purely for the good of the peneroka and NOT BECAUSE OF SUPPORT FOR THE OPPOSITION. People need to be clear on this.
12:11 AM


Very good analysis. You will know why they against the listing.

Its mostly the buggers who have mixed blood in their DNA that resort to such acts.

Look at the female Indian Muslim senator minister, and then the bugger who was Finance Minister II and now in the PM's office, the fellow who is heading the land below the wind.

One can easily discern these mixed blood idiots who take all that should be distributed fairly amongst the Melayu tulens.

Real idiots they are!

Rozali just concentrate on your many wives la. Dont try to be noble after you have benefited so much with Puncak Niaga. You were a nobody before. Cant stand people who take the high ground only when it suits them.

The DG Dzulkefly has never been a opposition man. He's always been a Felda man! He understands the background and the motives of Felda. The listing will benefit settlers in short term cash but the bulk of the money will be gained by CIMB and a select group of cronies.
He like many don't want to sacrifice the profitable part of Felda for the loss making one.
Rocky - the Felda DG is being victimised and unfairly treated by Isa and Najib.
He needs all the support and his side of the story to be told.

Rozali going against PM.
Soon Rocky will stop spinning when his contract expires.
He goes where the wind blows.

Happy Birthday Datuk and many more to come.

Welcome to my blog Caal Blog

One thing for sure, many hate Rozali because he made a lot of money thru the water concession. Strangely, many do not complaint when the chinamen and indian that get concession or special business monopoly macam broadcasting, IPP, dll that make tonnes and tonnes of moneies.

Banyak yang suspect Rozali nak make money in Felda. Who doesn't? By his willingness to go against the grain, saya percaya niat dia nak make sure that the penerokas are not taken for a ride.